Just in time for 'Christmas in July'!

This WAS going to have been released earlier this week, but a pack of evil Mexican wrestlers stole the masterfile. However, editor L.L. Hundal chased them to their secret hideout in the hills outside Shanghai, defeated them in battle, and brought it back just in time!

Click here to get your copy today to make her pain and suffering and many bruises feel more worthwhile--and get it for 33% off the normal price. (Sales lasts until August 1.) 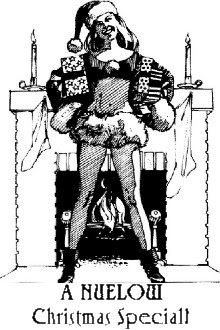 Posted by Steve Miller at 7:22 PM No comments:

For your OGL Modern Games: The Alien Abductee! 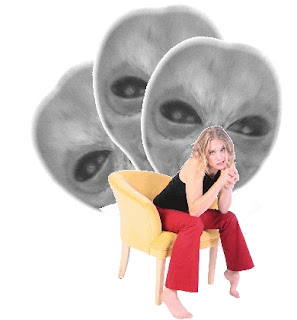 If you're playing d20 Modern or another game that's compatible with Modern OGL, I think you'll find this advanced class and associated feats and Talent Tree useful and amusing.

Click here to read more and to see the listing at RPGNow.

(And what do you think of my Photoshop skills? I'm a master, ain't I?!)
Posted by Steve Miller at 3:09 PM No comments:

Who killed Oetzi the Iceman? Was it the religious fanatic? Perhaps the angry cook? Or maybe Bigfoet, the Tyrolean Yeti?

On a Wednesday afternoon some 5,300 years ago, a shepherd headed into the Alps to tend his flock of goats. He would never see his home again. His mummified corpse and violent death have been the subject of study and speculation since a retreating glacier released him from his makeshift grave in 1991, A.D. (or C.E.... whatever.)

In observance of the 20th anniverary of the discovery of the victim now known as "Oetzi the Iceman," and in support of NUELOW Games' goal of educating while entertaining, we proudly present Icing Oetzi: A ROLF! Historical Recreation.

The result of all the research that can be expected for a $0.50 product from a company named NUELOW Games, the three combat scenarios and four pre-generated characters presented gives insight into a mystery that's more than 5,000 years old. Who killed Oetzi? The religions fanatic? The angry cook? Or the Tyrolean Yeti? Play the Recreations with friends, and decide which one rings true.

Get your copy today from RPGNow by clicking here. Proceeds from ever copy sold contributes to keeping me in house and home, as well as off the streets and out of trouble. Do your part today!
Posted by Steve Miller at 8:19 PM No comments:

Yes, I am available for commissions.

A great artist was lost to the world when I chose to become a writer.... 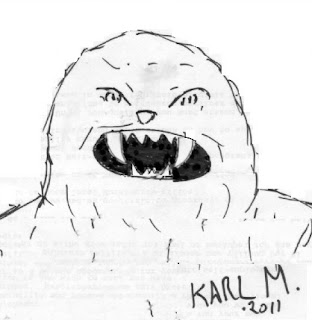 That's a portrait of Bigfoet, the Tyrolian Yeti, as will be seen in the upcoming NUELOW Games release "Icing Oetzi: A ROLF! Historical Recreation".
Posted by Steve Miller at 7:24 PM No comments:

I got a little more elaborate than usual...

... with my cover design for the NUELOW Games edition of John Kendrick Bangs' "Alice in Blunderland". 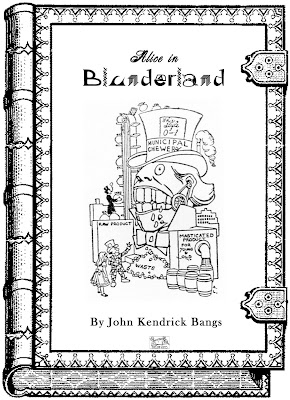 I keep the cover images for the NUELOW releases very, very simple so they'll shrink down for display on sales listings on websites, and I think I may have outsmarted myself with this one. It doesn't shrink nearly as nicely as others. Still, I like the look.

If you follow politics at all, this book might actually be of interest to you. Although it was written in 1907, the jokes seem disturbingly relevant as Alice travels to a place where dimwitted politicos govern by whim and they view everyone and everything as their personal property. And that includes the teeth in people's heads and whatever they think of as their "private lives." Check it out. Plus, the $0.99 you'll spend goes to a great cause: Keeping me in house and home!

(BTW, I use the term "design" loosely when referring to the covers I make for the NUELOW Games products. All I do is make a logo, select art or photos from my archive [but limiting myself to the things I am certain I have clear rights to], and then put them together with a couple of graphics editing programs. As a graphic designer, I make a great games publisher!)
Posted by Steve Miller at 7:27 PM No comments:

The return of Modern Advances!

Back when I made products for ID Adventures, I did a fun little series called "Modern Advances." It provided quirky advanced classes for OGL Modern games.

Now, with NUELOW Games coming back to life, I'm also reviving Modern Advances! I'm hoping there are still players out there, because d20 Modern was a fine game, and the Modern Advances line makes it even finer!

First up... "The Hardcore Activist and the Masked Avenger." (With a design and cover art by yours truly, Steve Miller.) 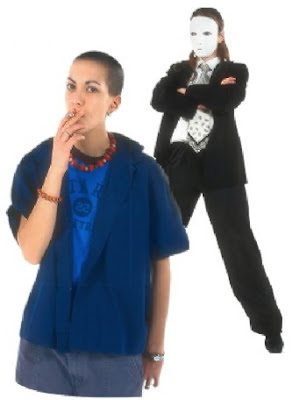 Check it out by clicking here! It's a revised version of a couple of ID Adventures releases, but I'm hoping that MA will be popular enough to warrant the design and release of NEW entries as well.
Posted by Steve Miller at 3:18 PM 1 comment:

Something to help you get through the long weekend

Earlier this week, I published my first of several eBooks featuring classic fiction re-edited to a lesser or greater degree by yours truly. I'm leading this new venture of mine with a long-time favorite--John Kendrick Bangs' "Houseboat on the River Styx".

I've performed some editing and abridgments of Bangs' original book and combined it with an edited version of the sequel, "In Pursuit of the Houseboat". I hope my efforts have breathed new life into this neat fantasy classic that has the leading Shades of Hades creating a social club. Arguments about life, the afterlife, and why it's too bad that Noah didn't put dinosaurs on his ark ensue.

For a special sales price of just $1.25, you can get a 94-page pdf-format book with chapter illustrations by famed fantasy artist Larry Elmore and others that you can enjoy on a number of platforms, the iBook in particular.

All of my earnings on the book go to feed my hungry cats, so please buy a copy today! Archie and Edith will be ever so grateful. 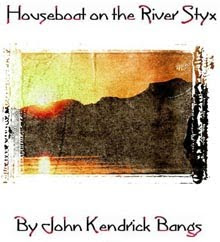 (Also, be sure to keep a look-out for the tie-in with my recently released game "Rolf!: The Rollplaying Game of Big Dumb Fighters". It'll present several of the characters from "Houseboat on the Styx" through the prism of "Rolf!", battle ready for your imaginary mayhem enjoyment.)
Posted by Steve Miller at 8:23 PM No comments: