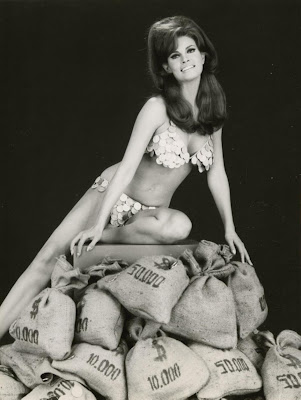 That picture is the dream. The reality is far, far different... as any small game publisher will tell you. There are no piles of money... and L.L. Hundal threatened me with a gun when I suggested she could be a booth bunny for us and dress up in a chain-mail bikini; I should know better than to joke with a lady who came up with a game that's all about kicking ass.

Still, we do sell a handful of copies of our game products and fiction anthologies. And here's the monthly list of the Top Ten Best-selling titles. Click on the titles for more information, or to join the many people of exceptional and/or unusual taste who have already purchased these excellent titles!

'Oriental Stories' is the Pick of the Week at DriveThru Fiction!

NUELOW Games' most recent Robert E. Howard anthology is currently featured on the front page of DriveThru Fiction as their pick of the week. Click here to check it out, or to get your own copy for just $3.99! 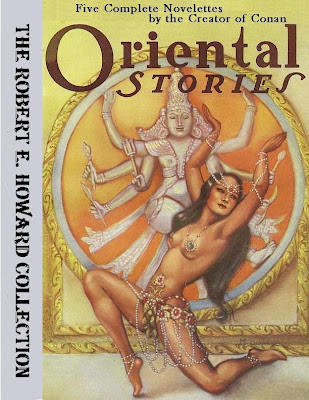 Posted by Steve Miller at 4:37 PM No comments:

"ROLF!: Dead Presidents" is the latest release for ROLF!: The Rollplaying Game of Big Dumb Fighters sees Abraham Lincoln and John F. Kennedy teaming up to stop a nefarious plan by Adolf Hitler and to attack the United States of America. This supplement features two straightforward battle scenarios and five pre-generated characters, in addition to a number of Battle Maneuvers and Traits not found in the core ROLF! game.

It's Presidents Day mayhem from Steve Miller & L.L. Hundal. Do the patriotic thing and stimulate the economy by spending some money at RPGNow!
Posted by Steve Miller at 11:30 AM No comments:

Pulp fiction author Robert E. Howard was a big history buff, and his favorite kind of story to write was one that is rooted in history. In fact, he once said that if there was a broader audience for historical fiction, he would not have written anything but that. 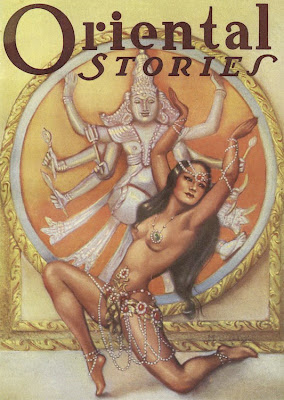 "Oriental Stories" is available now for just $3.99. Click here to get your copy.
Posted by Steve Miller at 5:59 AM 2 comments:

Add a little love to your ROLF! battles!

ROLF! co-creator L.L. Hundal provided this little Valentine's Day gift to all gamers who like the Rollplaying Game of Big Dumb Fighters... Cupid ala ROLF! ("He can be added into just about any battle scenario if there's an extra player, and a little extra chaos is wanted," she wrote.)

NEW TRAIT
Dead-Eye: The character hard ever misses with a ranged weapon. He or she reduces ATT check results for ranged attacks by 4.

Cupid (Male)
Brawn 13, Body 15, Brains 4
Traits: Dead-Eye, God, Nimble
Combat Maneuvers: Basic Attack, Dodge, Strike Pose, Run Away!
Important Stuff Worn/Wielded: Bow (Small Ranged Weapon, Deals 2 points of damage), Ever-Full Enchanted Quiver (Provides unlimited shots for bow).
Special Notes: Twice per battle scenario, Cupid may shoot other characters with Love Arrows. He can keep trying to hit targets, but once two have been struck, he cannot fire any more Love Arrows that scenario. Targets struck by a Love Arrow immediately falls deeply and insanely in love with whatever character is closest to them in the fight. The target can only use the Strike Pose and Seduce combat maneuvers against the love object. The target may use combat maneuvers against other targets in the battle as normal. If the object of the target's love attacks the target and deals damage for two consecutive rounds, the magic of the Love Arrow is broken and the target can once again use all combat maneuvers freely.

Posted by Steve Miller at 1:48 PM No comments:

We here at NUELOW Games have a long history of doing the wrong thing at the wrong time. So, so is it any surprise that our ROLF! Valentine's Day special is more about lust than love, and it centers around two superheroes that virtually no one has heard of and an actress that the world has mostly forgotten. 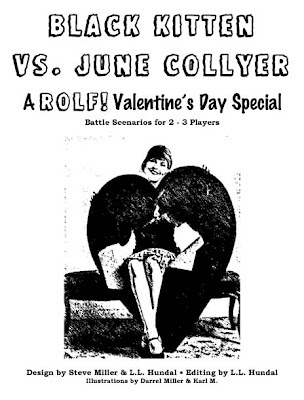 Click here to get your copy of "Black Kitten vs. June Collyer" for just $0.50, and celebrate Valentine's Day with your beloved game group in a way that is bound to make them say "Whut?"

(Steve Miller, the co-designer of this ROLF! release, has reviewed several of June's movies at the Shades of Grey blog. Click here to check them out.)
Posted by Steve Miller at 11:39 AM No comments: 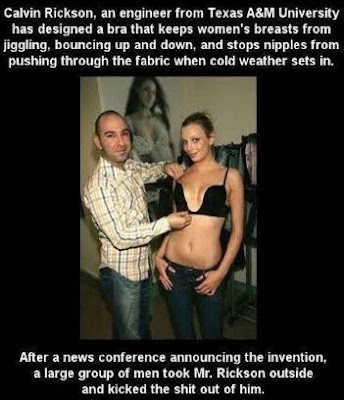 THE BATTLE SCENARIO
Calvin Rickson, inventor of the most evil undergarment ever devised by man, is attacked by an angry mob. He must defeat them or suffer a terrible fate.

This Scenario is for 2 players, with one player controlling Calvin and the other controlling the Members of the Angry Mob. There are 10 angry men in the Mob.

1d4 members of the Mob attack Calvin during the first round of combat. 1d4 additional attackers join the fray whenever one of them falls, until all 10 are in the fight.

If Calvin tries to use Run Away! to flee, members of the Mob not yet fighting him attempt to use their Run Away! Combat Maneuver to stop his retreat. If one of them is successful, a new Battle begins, with 1d2 Mob Members fighting him, and the usual 1d4 joining each time one of them falls.

The Battle continues until Calvin or the Angry Mob is defeated.

NEW STUFF
Calvin Rickson's Wonderous Jiggle-free Bra: Armor (Females Only), Absorbs 2 points of Damage. (Can be worn with Clothes, Leggings, Boots, and Hats, but no other kinds of Armor.)
Posted by Steve Miller at 12:13 PM No comments:

It's a little late, and it's only the Top Five best-sellers this time out, but I'm been a little distracted.

Once again, I thank all of you out there for your support of NUELOW in general and ROLF! and our Robert E. Howard collections in particular. They continue to do better than we could have hoped for. Tell your friends. :)

And we're always open to look at submissions; game industry legend Jeff Grubb published "Dyvil: First Edition" through us, so we can't be all bad! Drop us a line at stevemillermail@gmail.com if you want to publish your game (or even your fiction) under the NUELOW Games banner. There is, as they say, strength in numbers!

The Mayans predicted it! NUELOW Games wants to exploit it! The end of the world is coming (or so members of a wise, human-sacrificing ancient civilization tell us), so here's The Final Battle (#1 of 12): The Grim Reaper vs. The Fertility Goddess! 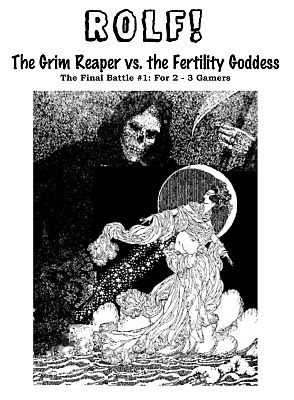