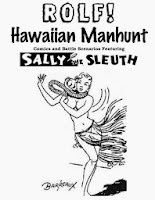 First up, we have ROLF!: Hawaiian Manhunt. It features a classic Sally the Sleuth episode by Adolphe Barreuax, a trio of outrageous battle scenarios that form a sort-of sequel by ROLF! co-creator L.L. Hundal, and pre-generated characters and two all-new Spellings --"Change Trait" and "Oh, No You Didn't!" (This marks Sally's third appearance in ROLF!, with Turkey Shoot and A Recipe for Evil being the previous two.) 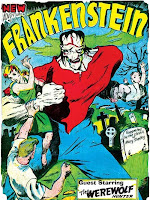 Then, just released this past weekend, we offer a look at a certified classic--Dick Briefer's New Adventures of Frankenstein. After reading the first two installments of Briefer's legendary series, you can pit Frankenstein's Monster against another horror legend--Herbert West, the Re-Animator, in a new battle scenario for ROLF!: The Rollplaying Game.

ROLF! co-creators L.L. Hundal and Steve Miller traded roles between the two books,  switching from editor to game designer respectively. We're both eager to hear what you think of these latest products, especially since Hundal has another Sally idea for the upcoming Christmas Special--for which we are still taking submissions.