It has come to our attention that we've done Christmas Specials, Barak Obama Birthday Specials, and Chinese New Year Specials, but we've never done anything to mark a time honored by billions and billions of people.

Well, before we re publicly shamed for our lack of inclusiveness, we're fixing that by offering the Ramadan Collection!

Click here to check out the content of the Ramadan Collection, or to get your very own copy. It's available through July 30 (or until GB joins the just-declared Califate).
Posted by Steve Miller at 9:01 AM No comments:

It's a Party in the CIA with Madam Zero!

Some parody songs are more amusing and entertaining than the source they are based on. A perfect example of that is Weird Al's "Party in the CIA." It's got better lyrics than the original and its video even makes more sense.

It's a favorite of the NUELOW Gang, even if L.L. Hundal's Significant Other has banned it from their home, because Hundal would play it over and over while singing along as she searched through comics for us to republish.

I'm bringing it up here, because it also seems like a perfect theme song for the most recent release for ROLF!: The Rollplaying Game of Big Dumb Fighters... 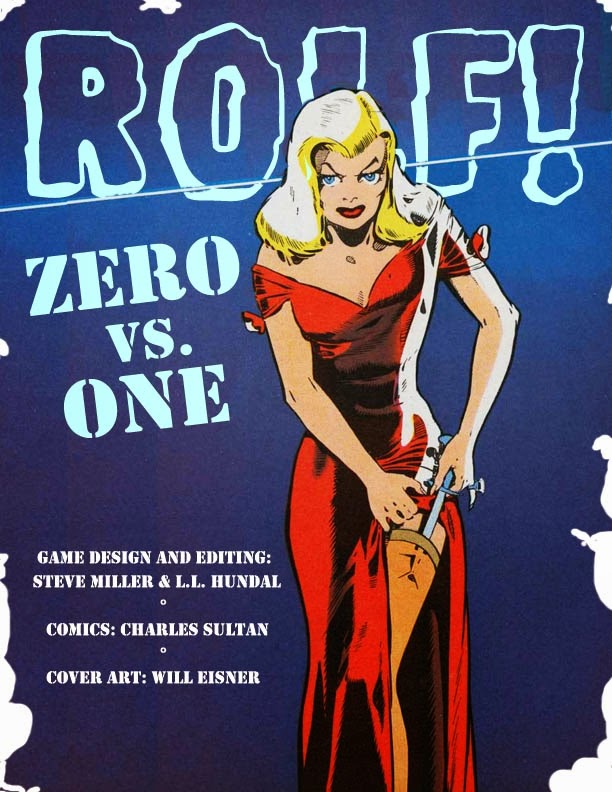 ROLF!: Zero vs. One is a full-fledged ROLF! supplement with two battle scenarios, four pre-generated characters, and a number of new Battle Maneuvers and Traits. In addition, it features the complete run of Madam Zero, an obscure back-up series from Fiction House's Fight Comics that featured one of comicdom's most mysterious heroines. And Madam Zero is exactly the sort of character that "Party in the CIA" is about.

Click here to see previews of ROLF!: Zero vs. One, or to get your own copy.

Posted by Steve Miller at 10:09 PM No comments:

It's the First Day of Summer AND Free RPG Day!

To celebrate the first day of summer and Free RPG Day, we're offering three of our roleplaying games for free! 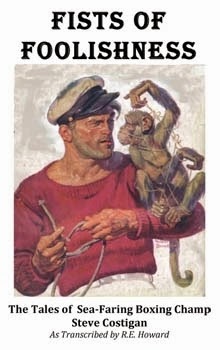 Until Midnight when June 21st turns into June 22nd, you can download Fists of Foolishness, which contains The Violent Worlds of Robert E. Howard RPG and a dozen short stories to get you the proper mood to run adventures with it; You vs. Me, a  crazy two-player, GM-less RPG by L.L. Hundal;; and Dyvil: First Edition by the legendary game designer and author Jeff Grubb, free of charge! 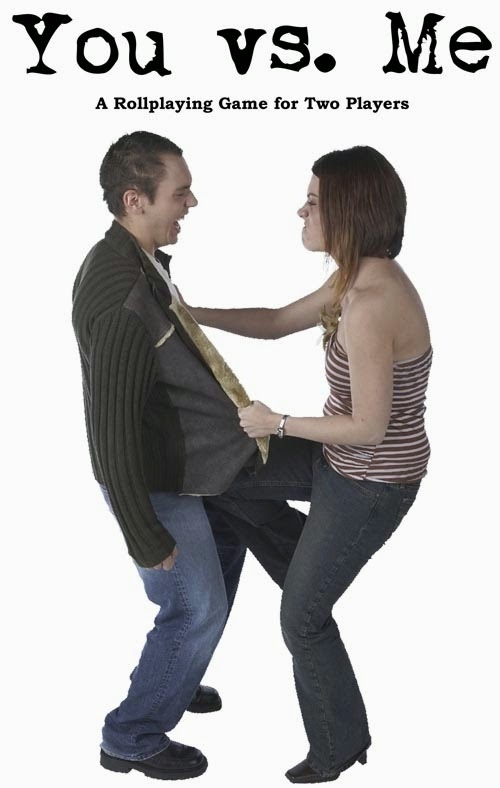 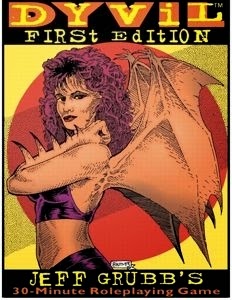 Additionally, the NUELOW Games Summer Special is still on sale at a reduced price. In addition to half a dozen summer-themed comics, it features a scenario compatible with both The Violent Worlds of Robert E. Howard and You vs. Me. Check out the free games and summer deals before they are gone!

Posted by Steve Miller at 8:23 AM No comments:

Email ThisBlogThis!Share to TwitterShare to FacebookShare to Pinterest
Labels: Announcements, free roleplaying games, Robert E. Howard, Rolf, You vs Me

Planning a trip to the Underdark?

You're going to need some maps... and the NUELOW Map Pack #2: Underdark has just what you need!

This new set of maps by Andrew Pavlides includes six different maps of tunnels and cavern systems. They can be used individually or joined at the edges as player characters move through the monster-infested underground. All the maps are indexed in an easy-to-reference PDF booklet and presented in both color and printer-friendly black-and-white formats.

As a special treat, we've included some drawings next to the maps in the index book to help give you some inspiration about what players may encounter in that area.

Click here to see previews or NUELOW Map Pack #2: Underdark, or do download your own copy (And, as always, we invite your feedback!)
Posted by Steve Miller at 12:39 PM No comments:

Now Available: Character Portraits for Your Home Game or Publication!

The latest in NUELOW Games' series of stock art collections is the NUELOW Fantasy Character Stock Art #1: Spellcasters & Sorcerers. As with past stock art releases, your purchase and download of this product grants you a generous license to use the artwork in any personal or commercial product you choose. The only real restrictions are that may not resell the stand-alone illos individually or as part of a clip-art package, and when you use the art in products or public websites, you need to acknowledge the copyright of the artist in a way spelled out in the license.

NUELOW Fantasy Character Stock Art #1: Spellcasters & Sorcerers contains 14 different character portraits (12 by artist Darrell Miller), 12 of which are presented both in color and grayscale. As always, individual jpg files are included, but this time around they're at 300dpi so you can use them in print products if you like.

Click here to check out previews of the set, or to download your own copy. (Be sure to let us know if you use the art in any publications or websites... we will give you a link here on the blog!)
Posted by Steve Miller at 10:08 AM No comments:

The NUELOW Games Summer Special continues our ongoing project of unearthing interesting material from the Golden Age of Comics and bringing them to modern audiences. This book documents entries in the teen comedy comics genre which thrived from the early 1940s until the mid-1970s, tracking roughly with the rise and fall of romance comics. In fact, there is much overlap between the two, with the teen comedies often involving romantic entanglements of some sort or another.


The NUELOW Games Summer Special presents half-a-dozen summer themed stories, in which comic book teens hit the beach, and Black Cat hits the bad guys. It features work from such industry legends as Harry Sahle (one of the artists who established the look of Archie, the sole surviving teen comics character from those days), Al Feldstein (who went on to be a celebrated satirist and editor of MAD Magazine), Lee Elias (one of the Kings of Good Girl Art), and others.

In addition to classic comics, the book features a full-blown ROLF! supplement... although if you are a regular visitor to this blog, you've already seen much of it, since it's an expanded version of the "Kathy" battle scenario that was presented here earlier this month.

Click here to check out previews of the NUELOW Games Summer Special. It's currently on sale for half of its regular price. The sale price will remain in effect through June 21, the first day of summer.

Posted by Steve Miller at 3:32 PM No comments:

We're currently putting the final touches on our biggest book yet -- a color collection of the complete "Starlight" series by writer Ann Adams and artist Ralph Mayo. Mayo was also the primary artist on NUELOW's Judy of the Jungle books, as well as being a collaborator of Frank Frazetta on Kathy.

Warrior Maiden Starlight collects all six Starlight episodes for the first time between two covers. The series debuted in Indians #2 and lasted through Indians #8, appearing and disappearing during the second half of 1951. Set during the mid-16th century, in a time prior to contact with European settlers, the series follows the adventures of a a rebellious Huron girl who is out to prove that she can out-hunt, out-fight and outsmart any warrior, any day. She was the last of the strong female lead characters that were a staple among Fiction House's anthology titles, with the premiere among them being Sheena, Queen of the Jungle.

A number of critics have said that the only reason Fiction House published comics with female leads was so they had an excuse to present page after page of T-and-A, as their "strong female characters" usually appeared in very skimpy outfits. However, Starlight puts a lie to that theory in every way. She is always fully clothed, even in scenes that provide a perfect opportunity for her to strip down and provide some "fan service," so there's no question that this character exists to be a strong and positive leading lady figure. In Mayo's drawings, she's always beautiful but never turned into a sex object... something contemporary comic book artists should try. If they really were interested in presenting "strong female characters" (as the claim so often goes) they'd draw their female characters more like Starlight and less like Hustler Magazine centerfolds.

Warrior Maiden Starlight will be the biggest RPG/comics hybrid product from NUELOW Games so far, with a pagecount clocking in around 70. We hope you'll decide to check it out when it becomes available. In the meantime, here are ROLF! stats for Starlight, and a draft of the cover. The final cover will feature the full logo, as well as slightly different artwork. 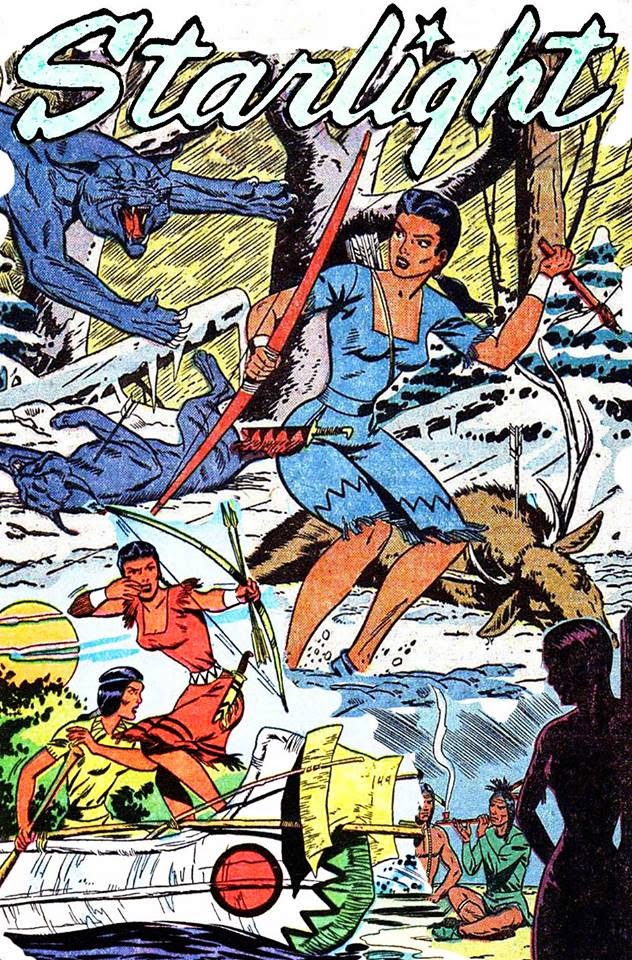 Posted by Steve Miller at 11:50 PM No comments: