While engaging in a purely mechanical and utterly boring task, the following addendum to a character creation system came to mind. This is raw, untested, and pretty much as it popped into my head. It is geared for d20 System games--such as Pathfinder, d20 Star Wars, or NUELOW Games favorite OGL d20 Modern--but it is easily applicable to any system that has analogies to the d20 System attributes and saving throw mechanics, Basically, it's a system for generating disabilities and mental illnesses for characters. 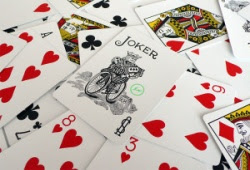 Generation System
1. Draw Three Cards. Discard any Aces or Jokers.
2. Determine the character's illness/disability by comparing the suits of the cards to the lists below. If the cards drawn are of different suits, the character suffers from all the illnesses/disabilities indicated by the cards. (See "Face Cards" for some special conditions, however.)

Face Cards
If one is a face card, your character has Multiple Personality Disorder; the sex of the card determines if the personality is male or female. If you drew one or more number cards of the same suit as the face card, the number on those cards determine how many multiple personalities you have. If multiple face cards are drawn, discard any Jacks or Queens first, then draw another card.
Otherwise, the suit of cards drawn determine the illness(es) your character suffers from.

Diamonds
Odd -- Bleeder... your character is easily injured and heals slowly. (+1 point to any and all damage suffered. -1 point to natural recovery).
Even -- Arthritic... your character's joints are still and it's painful to move sometimes. (-2 to all Dexterity-based skill checks and attribute rolls, -1 to Reflex saves.)