Before it was hip to jump up and down and declare how "inclusive" your game products were, NUELOW Games was quietly built it into the heart of what have become our flagship (only) game--ROLF!: The Rollplaying Game of Big Dumb Fighters.

When it became trendy to jump up and down and tell the world how inclusive your games were, we kept doing what we'd been doing on and off since 1994: We just put characters in supplements without issuing press releases. 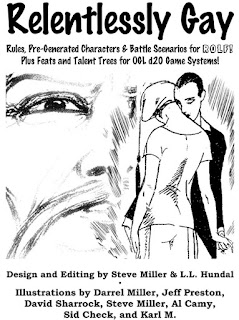 We're still not issuing press releases, but we have gone ahead and made it obvious that we are "inclusive," because we have just released Relentlessly Gay, a product so inclusive that it is crammed with characters who possess the Same Sex Preference trait, who come from the present, the past, and future, are of various ethnic and socio-economic backgrounds, and so on, and so forth. This is the biggest ROLF! supplement we've released so far, compiling not only the characters, but also key bits of the game that have developed over the past four years in the various supplements (such as the rules for inventors and scientists, expanded mutant rules, specific melee vs. ranged combat rules, and much more). Relentlessly Gay will hopefully make ROLF! players relentlessly happy, because a lot of stuff is now consolidated in one place--you know... all-inclusive.

To make Relentlessly Gay EXTRA inclusive, we included some OGL d20 System content. Some of it's been previously seen here on the blog and officially released in products, but there's an all-new talent tree and feat as well.

Click here to see previews of Relentlessly Gay, or to get your own copy at RPGNow.
Posted by Steve Miller at 4:27 PM