Continuing our quest to become a respectable game company and to forever be patting ourselves on the back over how inclusively diverse their products are, NUELOW Games brings the world yet another element that can be added to to the character generation process of any table-top roleplaying game where the designers HAVEN'T been diverse in their inclusivity and thus have come up with a biased game that isn't properly representational of its player base.


For even more diversity it your game, be sure to add this to its character generation system, too. (You can randomize race by rolling a d6 and comparing it to the list.) 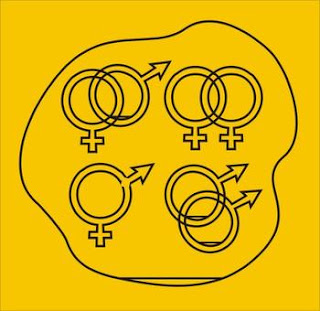 Posted by Steve Miller at 9:13 PM No comments:

Here are a couple tables to randomly generate subplot ideas for your sci-fi campaign. Roll first on Why is the Android Behaving Strangely?, then on Who's Behind It?

WHY IS THE ANDROID BEHAVING STRANGELY? (Roll 1d6)
1. A flaw in the programming. (Don't roll on "Who's Behind It").
2. A hacker is trying to control it via a remote uplink.
3. Adjustments to its programming intended to 1-2, make it more efficient; 3-4 make it more human-like in its reactions; 5-6 make it eventually turn on its owners.
4. A virus uploaded into its programming matrix is gradually causing it to 1-2 shut down; 2-3 become a spy-bot; 5-6 become a killing machine.
5. A disembodied alien entity has taken over its personality maxtrix and is now in control.
6. The android is unchanged. The player characters have been shifted to an alternate universe similar to their own. 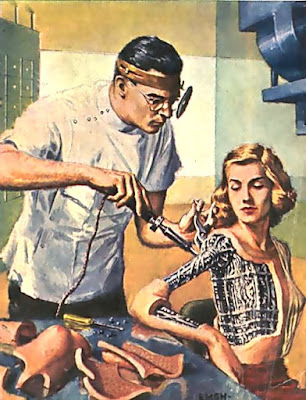 WHO'S BEHIND IT? (Roll 1d6)
1. No organized force; it's just one of those things.
2. An old enemy.
3. An agent of a galactic mega-corp trying to get the PCs under his or her control.
4. An old friend trying to secretly reach out for help.
5. A mercenary group trying to establish their reputation by taking down the player characters.
6. An alien invasion force that wants to distract or neutralize the player characters so they won't get in their way.

--
If you enjoyed this post, consider supporting our efforts by purchasing some of our many releases. You can view a selection by clicking here.
Posted by Steve Miller at 9:20 PM No comments:

d20 Supers: The Reports of My Death Were Exaggerated!

A couple superpower feats, yet more parts of the d20 Supers game that we may or may not ever produce. This pair of feats exist to explain how certain characters can come back from the dead over and over and over. (As always, these are released under the Open Game License. Copyright Steve Miller 2017.)

LUCKY [Minor Power, Meta-Gaming]
You lead a charmed life.
Prerequisite: One attribute above 12


THE REPORTS OF MY DEATH... [Minor Power, Supernatural]
You were dead... but you got better!
Benefit: If the character dies (reduced below -10 hit points, disintegrated, blow to tiny bits, lost and drowned at sea, eaten by rabid weasles--any death, no matter hor mundane or terrible), this feat allows them to instantly return from the dead. The character reappears somewhere out of harm's way, with 1/4 of his or her hit points and a semi-plausible explanation of how he or she survived (the GM or player may invent something).
The feat can only be used once. After the character has miraculously (perhaps literally) escaped death, the feat must be replaced by one of the following (with all prerequisites needing to be met): Attentive, Better Lucky Than Good, Cautious, Dodge, Lucky, Never Say Die
Special: There is no benefit from this feat until the character dies. If the character possesses the Lucky feat, the character can replace it with this feat after he or she is killed, essentially getting a two-for-one on rising from the dead.
If the character replaces this feat with Lucky, the cycle can repeat itself.

You can see the first parts of this game approach here, and everything on this topic that's been posted here. Much more (and refinements of these posts) have also been featured in many of our comics/rpg hybrid releases.
Posted by Steve Miller at 8:41 AM No comments: