The Mystery of Becker's Pond

People are vanishing in the woods near Becker's Pond. Why? How? You and the player characters in your roleplaying game campaign can find out in a scenario inspired by an illustration by Bryan Baugh that you can create based on a randomly generated outline.

When Do People Disappear? (Roll 1d6)
1-2. Middle of the night.
3. Shortly before sunrise.
4. Shortly after sunset.
5. During the daytime.
6. No predictable time. Roll on this table each time a disappearance is to occur in order to determine when the next one happens. Ignore and reroll additional results of "6".
. 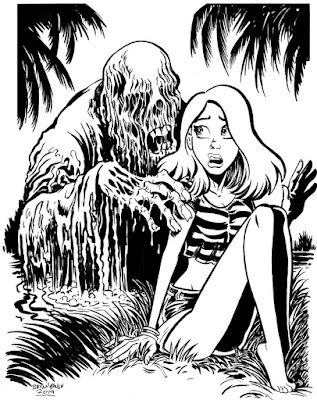 Who Vanishes Next? (Roll 1d6)
1. The local conspiracy theorist.
2. The minister's daughter.
3. The Instragram model.
4. 1d2 hunters.
5. 1d4+1 frat boys.
6. The player characters are attacked, either a single individual or as a group. If they lose the fight, they are among the vanished. (Player characters investigating the pond are the ones attacked. If none are investigating the pond, the smallest group of them that are together are attacked. Roll on "What is Responsible for the Disappearances?" to see what attacks the player characters.)

How Can the Disappearances Be Stopped? (Roll 1d6)
1-2. The evil must be destroyed.
3-4. The powerful international conspiracy that is truly behind the disappearances must be exposed.
5. The pond and forest must be cleansed with the magic generated by two Native American artifacts when they are brought together.
6. Atlantean druids must bless the pond and forest around it. And then the evil must be destroyed.

Posted by Steve Miller at 8:18 PM No comments: Links to this post