Ripped from yesterday's headlines! More action and intrigue than the latest big budget espionage action thriller, and almost as much logic!

"Gaddafi's Angels" is the latest supplement for ROLF!: The Rollplaying Game of Big Dumb Fighters. It contains three thematically linked combat scenarios and five pre-generated characters--including Colonel Muammar Gaddafi and his mysterious cadre of lovely women warriors, Gaddafi's Angels (making this another ROLF! supplement that's fun and educational!), Sarah Palin (a woman of mystery of there ever was one), and the sinister Agents of HUMMUS. 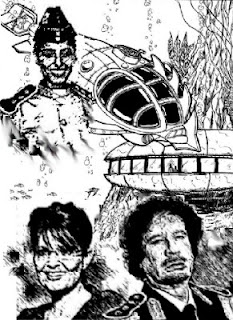 Gaddafi may be disposed and murdered (and few mourn him very much), but the battle of Angel vs. HUMMUS goes on. Now with 100% more Sarah Palin!

Click here to get your copy of "ROLF!: Gaddafi's Angels" from RPGNow.com for just 50 cents. This expansion works both with the current edition of ROLF! as well as the free Old Skool Edition.

All proceeds on sales of this product will go to fund my rise to supervillian status so can have my own cadre of hottie women bodyguards and secret agents on retainer. So get your copy today!