Some five years ago, NUELOW head-honcho Steve Miller had an idea for a system of super powers that could be grated onto any d20 System game that used the feats and talents mechanic to advance character abilities. It began with the post linked here, and Miller and his partner in NUELOWness, L.L. Hundal, has been expanding upon it ever since... through posts here at the blog and with content in many of the comics/rpg hybrid products that they've produced.
Miller & Hundal have agreed that they think they've just about covered all their favorite comic book heroes and their abilities via the rules they've been creating... and that it may be time to pull all the bits and bobs together into a unified and coherent whole and release an actual product! One of the last pieces may or may not be this new base class while Hundal has been using in her d20 Modern games for the last few go-arounds.
All text in this post is released under the Open Game License and may be reproduce in accordance with its terms. Copyright Steve Miller 2018 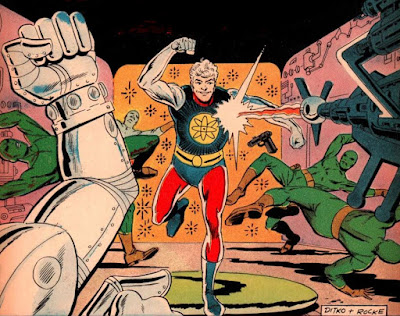 There are Fast heroes, Smart Heroes, Strong heroes... all the kinds of heroes you find described in the d20 Modern Standard Reference Document. But the Super hero stands above them all. Whether driven by supernatural forces, family heritage, or some life-altering trauma, the super hero has powers and abilities beyond those of mere mortals that he or she puts to use to defend the innocent from criminals and other evil people and entities that would prey upon them. It is a versatile class with access to the wide range of talents, as well as minor power feats.

Starting Feats
In addition to the two feats all characters get at 1st level, a Super hero begins play with the Combat Martial Arts feat, or a Weapons Proficiency feat of the player's choice. The character must meet any prerequisites before selecting a feat.

Class Features
All of the following are class features of the Super hero.

Talents
At 1st, 3rd, 5th, 7th, and 9th level, the Super hero may select a talent from any the following talent trees. Some trees have a set order that must be followed, while others provide a list to choose from.

Any and all Super Power talent trees for which the Super hero meets the prerequisites.
No talent can be selected more than once unless expressly indicated in its description.

Posted by Steve Miller at 7:06 PM No comments: Links to this post

Masks of the Ninja Cuties

This post is a supplement to NUELOW Games' Ninja Cuties. You can also find drafts of the material from that booklet on this blog, but if you like this post, we hope you'll consider getting our product.


MASKS OF THE NINJA CUTIES
The first Grandmaster of the Ninja Cutie clan has six children--three sons and three daughters. Being unable to choose which of his adult children would be the best to take over leadership of the clan, he said that he would give the position to the child who defeated a Grandmaster of a rival clan and presented him with the mask that embodied that clan's spirit. Two weeks later, five of his children returned together, each presenting him with a clan's mask... all except the youngest daughter. The children explained that she devised the strategey that saw the siblings working together to defeat all the other clan leaders and take the artifacts from them. He was so pleased that instead of giving control of the clan to just one of them, he divided its resources equally among them. He gave his youngest child the Face of the Cutie, the mask that symbolized the Shouchiibi (Ninja Cutie) clan, and the rest retained the masks they'd seized as the symbol of the part of the clan--the "House"-- of which they were now in charge.
As the Ninja Cutie Clan spread across the globe, the division of the clan that had happened in its early days served it well. Each part of the clain essentially ended up with its own "territory" and the masks were housed within the secret headquarters of the House in question. Here are the six Masks of the Ninja Cuties, as defined with the d20 System. (The rest of the text in this post is released under the Open Game License and it may reproduced in accordance with its terms.)

The Face of the Fox (Located in New York City, USA)
The mask grants the wearer a +2 bonus to all Intelligence-based skill cheks. Once per day, the mask can be activated by touching its left ear to allow the wearer to automatically see through  technologically- or magically-created illusions for 30 minutes.

The Face of the Cutie (Located in Tokyo, Japan)
This mask grants the wearer a +2 bonus to all Charisma-based skill checks. Once per day, the mask allows the wearer to cast charm monster at 12th-level effectiveness.

The Visage of the Bull (Located in Rio De Janerio, Brazil)
The mask grants the wearer a +2 bonus to all Strength-based skill checks. Three times per day, the wearer may ignore the hardness of an object while striking to break it.

The Visage of the Cat (Located in Hong Kong, China)
The mask grants the wearer a +2 bonus to all Dexterity-based skill checks. For one combat per day, the wearer cannot be flanked and gains a +1 bonus to AC or DC (depending on the d20 System variant) against all attacks.

The Visage of the Bear (Located in Christchurch, New Zealand)
The mask grants the wearer +4 to all Constitution-based skill checks, as well as a +1 bonus to all Fortitude saves.

Posted by Steve Miller at 4:39 PM No comments: Links to this post

There are a number of superheroes who are actually one or more individual beings who merge, either temporarily or permanently, into the hero. The most famous of these may be DC Comics' Firestorm, but Yankee Doodle Jones (who will be seen in a forthcoming anthology from NUELOW Games) also falls into this category.
This post presents rules for the d20 System game that will let you create your own superhero who is greater than the sum total of his or her parts. It's an involved process that involves generating multiple characters that eventually become one, but we think the end result will be worth it for the story and roleplaying potential it offers.
Part of this article is a random origin generation (the tables titled How Did the Combination Hero Come to Be? and How is the Combination Undone?), but we encourage you--in cooperation with your GM--to come up with a carefully considered backstory instead. You might even want to create a history for each of the characters who become the Combination Hero, so that if and when they become separated, you know how to play one or more of them.

CREATING THE COMBINATION HERO (for the d20 System)
By Steve Miller
Step One
Roll 1d3+1. The result is the number of characters that makes up the Combination Hero.

Step Two
Generate each character, using the standard character generation rules for the campaign/game you are playing in. (If alternate rules are in play that allow for more generous attributes [such as rolling 4d6 and dropping the lowest] they should not be used.)
Assign the results to attributes in the order they were rolled.
Randomly generate the level of each character by rolling 1d4. Assign character classes skills, feats, talents, and everything else that a character would have for each one, bringing the character up to its highest level. (You can shortcut this stage by only defining the individual characters' skills, although having each of the character that makes up the whole to come might be important in certain situations.)

HOW IS THE COMBINATION UNDONE (Roll 1d10)
1-2. It is permanent unless undone through the will of a powerful god.
3-4. The hero must speak a magic word that is only known to a mystic order that dwells in a remote, hard to access place. Any of the characters who made up the hero will be able to speak the work and re-combine them all.
5-6. The hero must be exposed to rays from a specific alien device.
7. The hero must touch a particular object. When the characters who were combined all touch the object again at the same time, they will re-combine into the hero.
8. When the hero is subjected to a rare type of radiation or a specific type of magical energy.
9. The hero must die.
10. The hero must bathe in the Pool of All. This causes the characters to separate, although they do not become immortal unless they enter the Pool individually. (See Secrets of the Immortals for more.)

--
All text in this post is presented under the Open Game License and may be reproduced in accordance with its terms. Copyright Steve Miler 2018.

Posted by Steve Miller at 12:19 PM No comments: Links to this post