On the cutting edge for 20 years!

It has come to our attention that a certain d20 OGL-based RPG is being prasied as the ultimate roleplaying game because it features overtly gay NPCs and is therefore the most "inclusive" RPG in the history of universe.

While we congratulate the designers and developers and marketeers behind the "ultimate roleplaying game" for the buzz they're generating we feel here at NUELOW Games are scratching our heads in bemusement that gay themes suddenly seem to be something gamers are celebrating. We've been including gay characters and game mechanics in our games for 20 years--since the very earliest days of the NUELOW game series--and no one has ever celebrated us as "celebrating diversity."

Similarly, our current flagship line, ROLF!: The Rollplaying Game, seems to be more of an ultimate ultimate RPG, as from its earliest edition not only featured a "gay iconic character," but even allowed for the creation of overtly gay player characters. (Check out that hoary classic for free by downloading it here.) To this day, we regularly feature gay characters in ROLF! supplements--and they're not just there so we can proclaim how "diverse" we are to the world.. Hell, in ROLF!: Black Kitten vs, June Collyer we were even quietly turning Golden Age Superheroes gay well before DC Comics decided to make a marketing stunt.

But maybe that's where we went wrong. We should have been jumping up and down and shouting "Hey! Hey! Look at us! We've got gay characters!"... and maybe NUELOW "Fairies!" would have been the ORIGINAL ulitmate RPG! In fact, we are so casual about including gay characters in our products that we can't even remember which ones has them and which ones don't, with the exception of one mentioned above and ROLF!: The Breast Hope for Peace.

Yes... we're jealous. We are, first and foremost, attention whores here at NUELOW Games--inept attention whores obviously, but attention whores nonetheless. We need to jump on this "ultimate inclusive RPG" band-wagon before it becomes worn and tattered, and L.L. Hundal has come up with the perfect way for us to do it.

For your enjoyment (and our ability to say "hey... we're inclusive, and we've been inclusive since Nineteen-bloody-Ninety-Two! and we're still inclusive and full of diversity and ultimateness") here are some OGL d20 feats that will let gamers turn ANY OGL d20 game into an ULTIMATE RPG that's even more inclusive and ultimate than the ultimate RPG that triggered this post (and our envy and desperate need for attention)!!

Take it away, Ms. Hundal!

(Everything in this post below here, apart from the image, is Open Game Content, as defined by the Open Game License v1.0a. If you should wish to make your OGL d20 game products into ULTIMATE OGL game products, please include "Everyone's Gay! by L.L Hundal. Copyright 2013 Steve Miller and NUELOW Games" in the copyright section.) 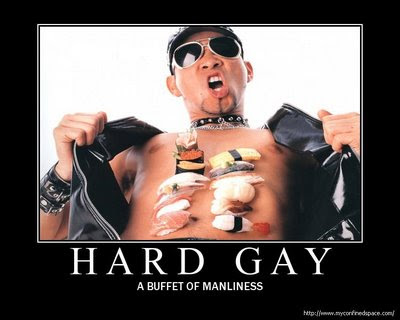 MODERN BASICS: FEATS OF DIVERSITY AND ULTIMATENESS
Feats to make any OGL d20 system into the Ultimate RPG
By L.L Hundal

Gay [General]
Your character has a sexual preference toward his or her own gender/sex.
Benefit: You receive a +2 bonus to all Craft and Perform skill checks.
Special: You receive a +2 bonus to Will saves when resisting charm person and all other mind-effecting spells and extraordinary powers and abilities from a character or monster of the opposite sex. If no saving throw is normally allowed, you may roll a Will save with a -4 penalty.

Gaydar [Social]
Your character can recognize other gay characters across a crowded room... across time and space even!
Prereq: Gay feat.
Benefit: Upon making a successful Spot skill check (DC12) the character can identify other characters who have the Gay feat within a 60-foot radius. If detected characters are out of line-of-sight, your character has a vague sense that there is another gay character nearby. If a target is hiding their gayness, the DC is the "closeted" characters's Disguise skill check.
Special: Characters with 5 or more ranks in Knowledge (literature) Knowledge (history) or Knowledge (conspiracy theories) may roll Spot checks to recognize gay persons in history or fiction.

Ghey [Social]
Your character is a bit of fool who is likely to write articles titled Feats of Diversity and Ultimateness.
Prereq: Wis 10 or lower, Cha 10 or lower.
Benefit: You receive a +2 competency bonus to all Bluff checks.
Special: Characters with the Ghey feat are inherently cowardly. They receive a -2 penalty to Will saves to resist intimidation and peer pressure..

(If you enjoyed those feats, please check out NUELOW Games's other OGL d20 Sysetm products. Click here to check them out. Heck, you might find that Feats of Seduction and Subterfuge will fit right in with your game if Gay and Gaydar work for you.)
Posted by Steve Miller at 3:17 PM 2 comments: Links to this post

For all of 2012, we here at NUELOW Games hedged our bets that it was not pure idiocy to claim that the end of the ancient Mayan calendar predicted the end of the world/time/universe/whatever. Each month, we released what might have been final game product ever.

The end result is that history carries on... and we're offering you a chance to remember the year the world didn't end by getting all 12 Final Battles in one easy download and at a reduced price. From The Grim Reaper vs. the Fertility Goddess to Apocalypse Not, these supplements cover with width and breadth of what you and your friends can do with ROLF!: The Rollplaying of Big Dumb Fighters. New Combat Maneuvers and Traits, new Spellings, and rules for taking ROLF! in entirely new directions, such as into the superhero genre and giving gamers an opportunity to create and play angels, demons, and gods.

Click here to read details about each of the 12 Final Battles, or to download them all for just $4. 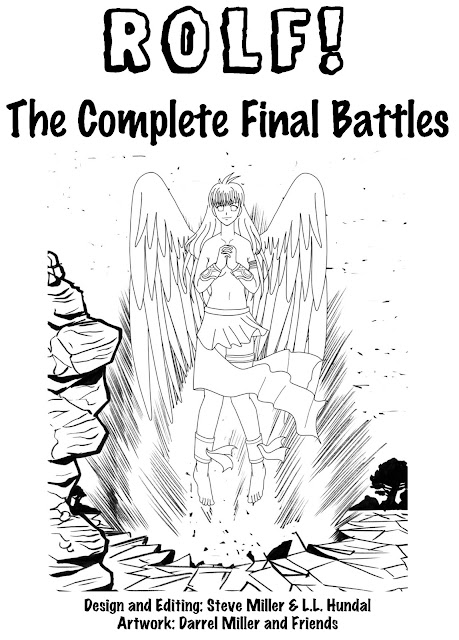 Posted by Steve Miller at 8:41 PM No comments: Links to this post