The Return of Sally the Sleuth!

When Sally the Sleuth goes undercover at the culinary college operated by Chef Gordon Blue, the question isn't whether she'll solve the mystery but whether she'll manage to keep her clothes on while doing so. We hope you'll check out ROLF!: A Recipe for Evil, the latest comics/RPG hybrid project from NUELOW Games. It marks Sally's second appearance in ROLF!, and our 12th release to feature actual comics along-side the game content.. 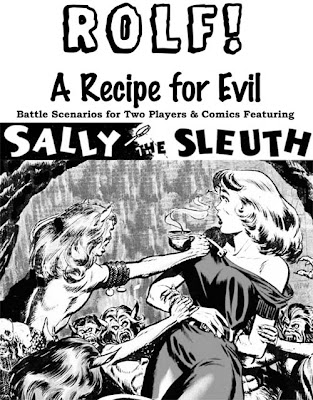 Last year, we published what we thought would be perhaps the first of two NUELOW Games products to contain actual comics--ROLF!: Turkey Shoot. It was a revival of the first woman detective in American comics and possibly even the genre's first "Good Girl," Sally the Sleuth, together with half a dozen of her earliest adventures.

That "Thanksgiving Special," however, led to way for a whole new product product category for us... the game/comic book hybrid, a concept Steve Miller has felt strongly about for many years. While we still haven't done anything with what was conceived as our second comics project (aside from a blog post written by L.L. Hundal), there have been a dozen other releases, which you can check out here. With the original Black Cat as a sort-of anchor character, we've dusted off characters that haven't been heard from since the 1940s and given them new life while presenting and remaining true to their original adventures. In some cases, we've even published, for the first time, the complete run of certain characters within a single book, like we did with the Veiled Avenger in Lady Satan and British Agent 99 in Film Fun Comics, Vol. 3.

We have many more comics/RPG hybrid comics planned. We hope you will consider checking out not only ROLF!: A Recipe for Evil, but also some of our other offerings. The Science Sleuths series is proving to be quite popular, for example, and the first few issues are devoted entirely to crime-fighting females like Sally. (With issue #3, we're adding a crime-fighting couple to the mix, as the Rocketman series joins the line-up.)

Brains, beauty, and a healthy helping of brawn... they're shooting from the hip and making weird science! 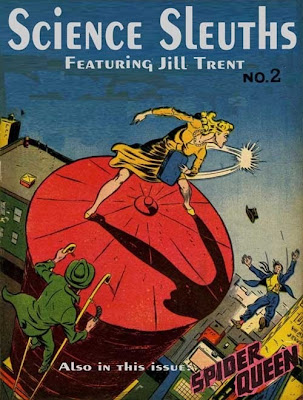 Science Sleuths #2 is now available for purchase at all the usual outlets! Click here to see previews or to get your very own copy. It features three action-packed stories starring Jill Trent and Daisy Smythe, as well as another Spider Queen tale. As always, there are some RPG tidbits as well--this time, it's d20 Modern OGL stats for Jill, Daisy, the Spider Queen, and the original Black Cat, the leading lady of our comics line. There are also a couple of other amusing filler items, because Steve Miller is obsessed with trying to make sure stories and chapters start on right-hand pages.

A special attraction in this issue is "Jill Trent: The Freezer Gas," which features early artwork from the legendary Frank Frazetta.

Posted by Steve Miller at 9:55 AM No comments:

It's Lovecraft's birthday, and YOU get the gift!

For today only, you can download ROLF!: Herbert West vs. the Zombies for free. The battle scenario was inspired by a string of stories that were among Lovecraft's least favorite of his works, but which rank among the ones we like the best here at NUELOW Games.

Posted by Steve Miller at 7:47 AM No comments:

Given what's going on in Egypt.... 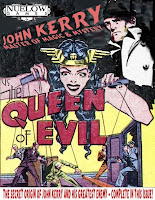 ... and the absolute disaster that is the Obama Administration's Mid-East policy, would it be bad form to mention that John Kerry vs. the Queen of Evil features Kerry as a 3,000 year-old priest of Iss revived in modern times to fight his undying nemesis? Yeah... probably, especially since it features ROLF! stats for Kerry, the Queen of Evil, the goddess Isis, and ancient citizens of Luxor. And then there's the back-up feature starring Black Cat where she takes on "Cleopatra of the Casbah." Yes. Almost certainly bad form, not to mention possibly disrespectful of the rioters burning Christian churches and attacking government buildings. So, I better not mention that book at all, even though it can be downloaded right now for the special "pay what you want" price.

It would be even tackier of me to bring up ROLF!: Super Muslim Bros., which pokes fun at the architects of the bloody mess that is Egypt today, as Barack Obama and Hillary Clinton go on a secret mission to help Mohamed Morsi out of a bind. Yeah... that would be even worse, since that one features ROLF! stats for Morsi, Obama, Clinton, Muslim Brotherhood Thugs, mummies, and other bloodthirsty Egyptian "protesters." And I should certainly not mention that you can find it for sale at RPGNow.

Yeah... that would be horribly insensitive to the "death to America" crowd, which is pretty much everyone in Egypt these days....

I think I'll just focus on promoting our new comics/gaming project -- the happy four-color wonder that is Carnival! After all, it's got game material geared for OGL Modern, a far more popular game that ROLF!, so it just makes sense. (It even features a Black Cat story that is non-Egypt related... and plenty of clowns that have nothing to do with formulating U.S. foreign policy.) 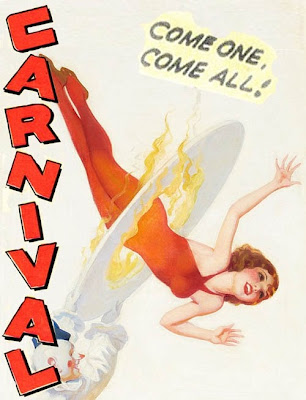 Posted by Steve Miller at 2:43 PM No comments:

What was lost, has been found--The Garden Mage returns!

An oldie-but-goodie product that we've received requests to re-release has been the OGL d20 product Modern Advances; The Garden Mage. However, we have not been able to find any of the source files, and Steve Miller has been unwilling to recreate it from the scraps that were uncovered by fans on the web... because he was uncertain if he would be able to do it right.

Yesterday, however, while trying to solve another problem, we found the original Garden Mage files. They had been mislabeled and therefore archived incorrectly as well. 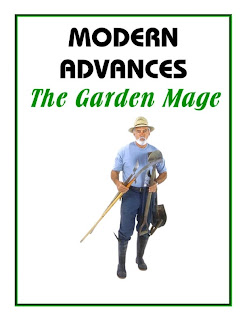 As a result, the most famous Garden Mage of them all, Kyle Bellamy, who wandered into the bushes in late 2007 and was believed lost and presumed dead, has resurfaced and been given a new home at the NUELOW Games storefronts on RPGNow and DriveThruRPG.

In celebration, we're offering Modern Advances: The Garden Mage at a discounted price to anyone who chooses to purchase it through this link. This is a limited time offer that's good through 8/30/2013.

For more information and previews of the product, click here. (You must use the link above to receive the discount, however.)

We hope you enjoy Modern Advances: The Garden Mage. Please let us know!
Posted by Steve Miller at 8:46 AM 2 comments:

We're working on our first comics project which will be presented in color. It's circus-themed, so the black-and-white look didn't work. Plus, the sources that were more uniform in quality than has been the case on previous comics releases. 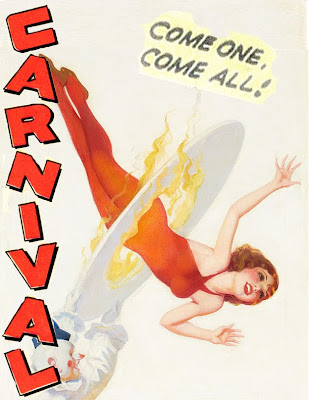 Posted by Steve Miller at 7:21 AM No comments:

NUELOW Games continues to be on the cutting edge with its digital-only reprints of classic comics. Not only does the just-released Film Fun Comics Vol. 3: British Agent 99 for the first time collect that entire series in one place, but it continues the company's tradition of turning Golden Age comic book characters gay.

From a statement by NUELOW Games publisher/lead designer/creative director/editor/whatever-else-he-feels-like-calling-himself-today Steve Miller: "Over the course of our three most recent releases--ROLF!: Christmas Special III, Science Sleuths #1, and Film Fun Comics Vol. 3: British Agent 99-- L.L. Hundal and I have turned as many Golden Age comic book characters gay. Not only that, but one of the characters we turned gay is closeted. Yes... we assigned sexuality to a character where there previously wasn't any and we made that character hide in the closet. Can you get any edgier than that?"

From a statement by NUELOW Games editor/designer L.L. Hundal: "We've been putting gay characters in NUELOW Games products since 1994, since long before it was hit upon as a marketing tool by the likes of DC Comics and Piazo, and whoever else has been running around singing their own praises. We have even included the option for players to make their own gay characters in several of our games. We've been doing it quietly, and we've been doing it when it since before it was trendy. Since 2011, we've been turning Golden Age characters gay in our products... and the first time we did it, in ROLF!: Black Kitten vs. June Collyer, we didn't even think anything of it. It just seemed natural and it seemed funny.
"We're making a big deal out of doing it this time not because we're jealous of the attention that DC Comics got when they turned Golden Age Green Lantern gay, or because Paizo got praised for being the ultimate measure in producing inclusive game material for saying some of their iconic characters are gay but not which ones, and for fluffy source material in setting manuals, but because we feel that it's time someone noticed the important and creatively weighty work that we're--
"Oh, to hell with it. We're making a big deal out of it this time because we're attention whores, just like everyone else who jumps up and down and issues self-congratulating statements about their open-mindedness and acceptance. We did it before it was the cool thing to do, we'll be doing it after it stops being cool and becomes the norm. I feel safe in saying that we were one of the first to make gay characters a part of our core game, and we've never thought of it as anything unusual or praiseworthy. But it's apparent that everyone else thinks it is. I want some of that bloody praise. And we should get an award. Perhaps even two. At least when we deal with sexuality, we don't just do just to burnish our PC cred or for shock or marketing value."\

Miller and Hundal did not specify which Golden Age comic book characters they have turned gay this time; "We're going a give-away," Miller said. "The first three people to successfully identify which characters we turned gay in those books will receive free digital copies of all our comics releases through DrivethruComics until the end of 2013."

The contest will be formally announced through NUELOW Games' Facebook page, but the possible choices are Black Cat (aka Linda Turner), British Agent 99 (aka Alan Douglas), Daisy Smythe (no known aka), Jill Trent (no known aka), Karl Vern (no known aka), Lady Satan (aka unknown), and Tim Trent (aka Black Cat, retired), A couple of those are pretty easy to figure out, however. 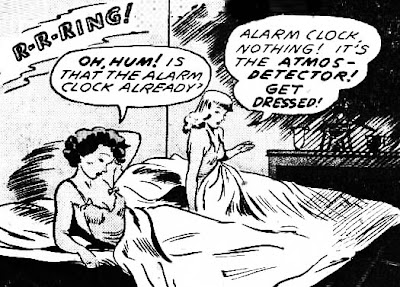 Another busy day dawns for Jill Trent and Daisy Smythe,
the stars of Science Sleuths (Art by Al Camy and Frank Frazetta)
Posted by Steve Miller at 10:40 AM No comments: