Coming of the Werewolf Hunter....

In celebration of Halloween, NUELOW is launching its latest series of comics retrieved from the dark, forgotten corners of the Golden Age of the 1940s to be joined with new fiction and RPG material for our own systems and those covered by the OGL. 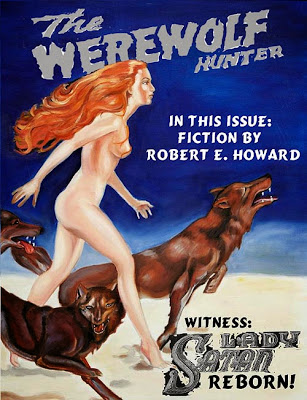 The first issue of The Werewolf Hunter is now available from RPGNow, DriveThruRPG, DriveThruComics, and DriveThruFiction--downloadable from whichever one of the sites you prefer to shop at. This first issue features the Werewolf Hunter, Professor Broussard himself, squaring off against two nefarious werebeasts; the mysterious Lady Satan's transformation from spy to mystic as she takes on a werewolf who preys on children; and a bone-chilling werewolf tale illustrated by Lee Elias, the lead artist on Black Cat.

In addition to the comics, this issue also includes a classic werewolf short story from Robert E. Howrd, the creator of Conan, and an original piece of fiction by Steve Miller (yep... me) revealing a secret that has been buried since the end of World War II.

Finally, there is a universal RPG supplement designed to bring variety to werewolves in any RPG system.

Click here to check out previews of The Werewolf Hunter #1.

Plus, be sure to check out the Lady Satan book for the first stories about NUELOW Games' latest superstar. 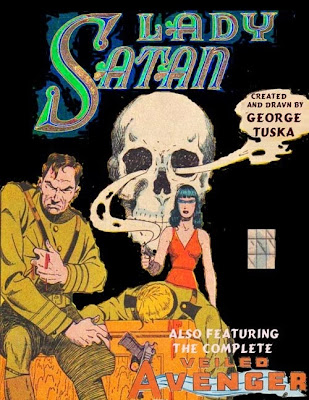 http://www.rpgnow.com/product/116140/Lady-Satan
Posted by Steve Miller at 9:05 PM No comments: Links to this post

Presenting the works of Bill Madden....

How do we select the comics we decide to publish in our anthologies o Golden Age reprints?

I've been asked that question a couple times now. The answer is the same that it was for the Robert E. Howard collections we produced last year... we find stories we think deserve more attention than they're gotten and we use our little vanity press here to put them before a new audience. Other things we consider is whether the material would hold any appeal to a modern reader whatsoever (who doesn't happen to be a total nerd).

Given those factors, it shouldn't be surprising we led with things like Jack Kirby's Stuntman, George Tuska's Lady Satan, and, of course, the lovely Black Cat.

For that same reason, it was a foregone conclusion that we'd want to put the work of forgotten 1940s comic book artist Bill Madden in front of modern readers. When L.L. Hundal first came upon his work, he was another creator about whom she said, "It's as if he drew these just so we could adapt them for RPGs!"

Upon surveying the dozen or so stories that she has identified as being by Madden, I agree that he was an interesting and unique talent. I can nitpick individual panels and some of his layout choices, but overall he had a dynamic style that stands out from the pack, and it seems to me that he deserved more recognition than he got.

According to Jerry Bails' "Who's Who of American Comics 1929 - 1999", Bill Madden (who also signed his work as William J. Madden and W.J.M) produced comics for the Chesler Studio during WW2 and moved to the Schoffman Studio during the post-war years; these studios produced content comics magazines from dozens of different publishers. There are indications that he started his comic book career working with industry pioneer Harry "A" Chesler as early as 1937, with work for Chesler's Centaur Comics imprint, but we've been unable to verify that with any certainty.

In general, very little information is readily available about Bill Madden. He's not a Bill Draut, Lee Elias, or George Tuska who kept working in the comics field after the 1950s and into the era where fans were hungry for details about creators. By the dawn of the Silver Age, Madden was long gone from the comics field, or at least no longer working in any sort of audience-facing capacity.

All we've been able to learn about Bill Madden through our usual half-assed, Google-driven research methods is in the preceding paragraph, and that the majority of his published, identifiable work was done through Chesler on their short-lived B-series--things like "Carnival," "Dynamic Boy," "Mother Hubbard," and "The Unholy 3." His presence at Chesler's studio is itself noteworthy as it was an important shop in its day, where celebrated artists like Joe Kubert and Carmine Infantino got their earliest professional gigs in the comics biz. Kubert was 11 or 12 when he apprenticed at Chesler's, and since Madden did not appear to serve in WW2, he may have been too young, too old, or maybe suffered some health issues. We don't know, and at this late date, we may never know. (But if someone out there wants to share details about William J. Madden/Bill Madden--where he came from and where he went after 1954--please get in touch!)

While Madden the man is obscured in the shadows of history, his work is here for us to enjoy. As mentioned, we've identified about a dozen stories that we'll be  reprinting in our comics/rpg anthologies over the next several months. In fact, we've already released half of them. Each of our books featuring his work collect the entirety of his recognizable contribution to a given series.

Our most recently-released Madden project features nothing but his work, cover to cover. "Mother Hubbard" was a series that ran for the first three issues of Scoop Comics in 1941. The third Hubbard tale (untitled in its original presentation and titled "Eye Trouble" for its NUELOW Games release) served as a source for the notorious Frederic Wertham's Seduction of the Innocent. (Perhaps this is why Madden left the comics field; Lee Elias walked away from the industry for almost ten years after Wertham claimed his art on the "Black Cat" series for Harvey was "perverse.")

Earlier this month, we released The Unholy 3 and OGL Trickery. Madden drew two stories about a trio of con artists and masters of disguise who have turned their talents to taking down criminal practiciners of their "craft." Inspired by the screwball comedies of the 1930s--the headlined by the Marx Brothers, Cary Grant, Katherine Hepburn, William Powell, and Myrna Loy--these stories should be particularly appealing to both lowers of comics and old movies. The book also contains a non-Madden adventure featuring superhero Black Cobra spending a chaotic night at the ballet, and these three stories are great examples of the freewheeling nature of comic book storytelling during the Golden Age of Comics.


The first of our books to feature Bill Madden, and the one that inspired L.L. Hundal to go digging for more work by him, was Carnival. It's a collection of three circus-themed mysteries, and although it only features one story by Madden, it's a great introduction to his work. It's also an excellent place to start with the NUELOW Games comics line, because it's rife with the sense of freewheeling, no-holds-barred storytelling that attracts us to so many of the short comics features from the 1940s and early 1950s.


We have at least one more title featuring unadulterated Madden in the planning stages. It's it working title is Madden's Boys, and it will be a collection of superhero adventures with Dynamic Boy and Rocket Boy. (There may be others--we're still researching this one.)

We're also in the process of identifying other Madden work. I think I've spotted him in at least two other stories, under the inks of other artists. I'm trying to confirm whether I am right or not before we publish. (My ID of Al Plastino in a couple of spots is a bit dodgy, and while I feel confident about my judgement that it is indeed Madden's work on a couple "Madam Satan" stories, I want to be as sure as I can be.)

Meanwhile, I hope you will choose to take a look at Madden's under appreciated work in Carnival, Mother Hubbard, or The Unholy 3. If you do, please share what you think, either on the site you download the book from, or here at the blog.
Posted by Steve Miller at 9:13 AM 5 comments: Links to this post

We've just released our latest collection of artwork from our archives for your enjoyment and publishing projects. 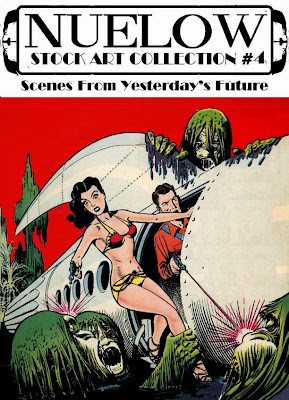 NUELOW Stock Art Collection #4: Scenes From Yesterday's Future: contains 38 color and black-and-white drawings, most of which have been adapted from the covers of Gold Age comic book such as Planet Comics and Space Adventures. Click on the link to see previews of the set, or to get your own copy and start adorning your website or retro sci fi projects with illustrations by Joe Doolin, Dick Giordano, and others.

Posted by Steve Miller at 8:58 AM No comments: Links to this post