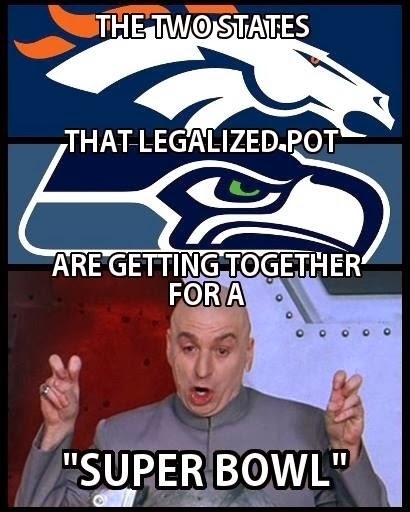 The staff at NUELOW Games (one being Eurotrash by birth, the other by upbringing) know next to nothing about American football. Still, what with Steve Miller being based out of the Seattle area, we still feel like we want to join in the excitement.

To that end, we are offering all Seahawks fans and Broncos fans a gift (and anyone else really). Through Monday, Feb 3, our two-player RPG You vs. Me can be downloaded free of charge! Use it to bridge the gap between yourself and that special friend who is rooting for the "wrong team"--or you can use it to make the rivalry even stronger.

It can also be used during the Half-time show if it sucks.

Click here for more information about You vs. Me, and to download your own copy for free!

And... gooooooo team! To victory!

Posted by Steve Miller at 12:17 PM No comments: Links to this post

Email ThisBlogThis!Share to TwitterShare to FacebookShare to Pinterest
Labels: Announcements, Occupy Your Gaming Table Movement, You vs Me

We're intending to release three Judy of the Jungle books this year. Here are drafts of the covers for them. They may be used as they appear here, they may be altered, or they may be replaced entirely if a better idea presents itself between now and release time). 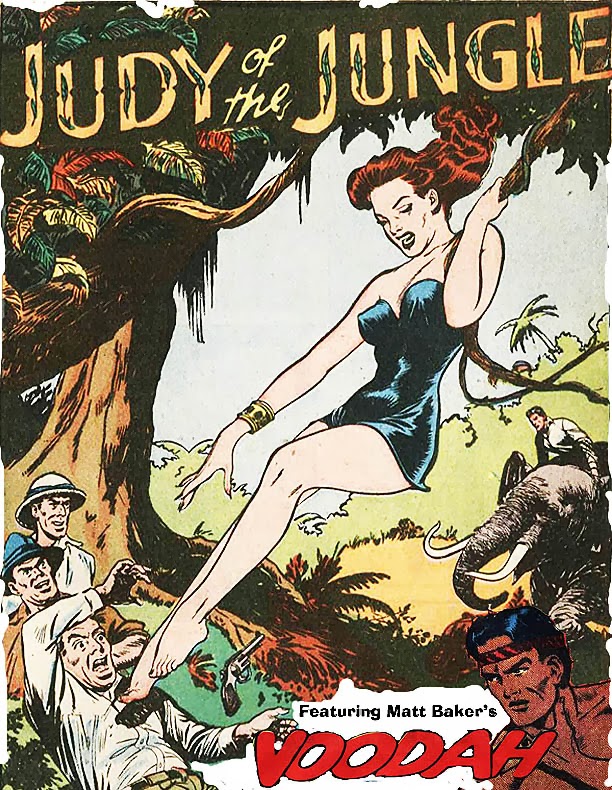 Posted by Steve Miller at 7:04 AM No comments: Links to this post

OGL Rules for the Wild

As mentioned in our 2013 Christmas Special, we're planning to release some jungle comics in 2014. In the process, we came up with some tidits for OGL Modern that are perfect for creating characters like Tarzan, Sheena, and soon-to-be NUELOW Games stars Voodah, Rulah, South Sea Girl, and, of course, Judy of the Jungle. 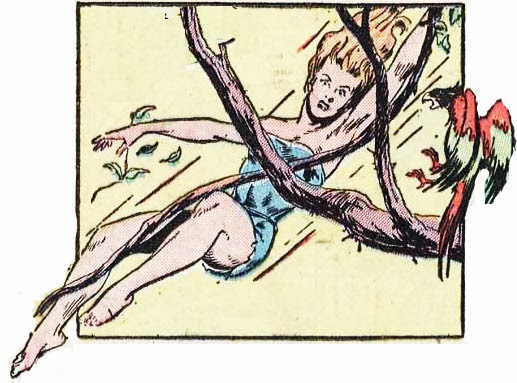 The following material is presented under the Open Game License, and it may be reproduced under the terms spelled out in it. Copyright Steve Miller 2014.
.
Starting Occupation: Defender of the Wild
You are at home in the wild, far away from modern civilization. You defend the wild space in which you live, attacking those who would threaten it with the savagery and determination of the animals you call friends.
Prerequisite: Age 15+.
Skills: Choose four of the following skills as permanent class skills. If a skill the character selects is already a class skill, he or she receives a +1 competence bonus on checks using that skill. Animal Handling, Climb, Intimidate, Jump, Move Silently, Ride, Spot, Survival, Swim, Treat Injury.
Bonus Feat: Select one of the following: Archaic Weapons Proficiency, Acrobatics, or Brawl

Talent Tree: Jungle Master
Talents from this tree are available to all characters who meet the pre-requisites.
Prerequisite: Strength 14+, Dexterity 14+, Constitution 16+
Beastmaster: You gain a +4 competency bonus to all Animal Handling skill checks. Animal Handling becomes a permanent class skills. If it was already a class skill, you gain 2 ranks in Animal Handling.
Hearty: You gain double the amounts of hit points through First Aid and natural healing.
Silent Death: You gain a +4 bonus to all Move Silently checks. You deal +2 damage with melee weapons.
Terror of the Jungle: You have a +4 bonus to all Buff and Intimidate checks when in a wilderness environment.
Untouchable: Your Class Defense Bonus increases by +2 when you select this talent. For all even character levels acquired, you gain an additional +1 bonus to you class-based Defense Bonus.


Posted by Steve Miller at 2:49 PM No comments: Links to this post

Email ThisBlogThis!Share to TwitterShare to FacebookShare to Pinterest
Labels: d20 System, Judy of the Jungle, OGL

The Bronze Terror was secretly Jeff Dixon, a successful lawyer who fought against those who would oppress his people both inside and outside the court room. His adventures, which took him from the Reservation to the Big City and back again were featured in the back of Daredevil issues #2 - 11, before fading into history. It wasn't until the 1970s that another comic book series would draw so heavily on racism and other problems of Native Americans in the modern United States. So, just like with his trailblazing signature series New Adventures of Frankenstein, Briefer was ahead of his time.

Tomorrow (Thursday, 1/16/2014), NUELOW Games will proudly release Real American No. 1, a book featuring the four best Bronze Terror tales (as selected by editor Steve Miller) and a battle scenario for ROLF!: The Rollplaying Game together with stats for the Bronze Terror, his girlfriend Lilly, and more.

We hope you'll give it a look.

Posted by Steve Miller at 2:51 PM No comments: Links to this post


THE FUTURE HERMIT SMACKDOWN
By Steve Miller
(soon to be the work of Shia LaBeouf and Grant Morrison)
Permission granted to copy for personal use and amusement.

Backstory
"It's done!" said Shia LaBeouf. "I have announced my retreat from public life because of the meanies in the media... and I'm getting more attention than ever! Yay! It sure was great that Alan Moore did the same thing back just before New Year's or I may never have thought to do it!"
There's a knock at the door.
"Are you Shia LaBeouf?" asks the old man with the wild beard and hair when Shia opens the door.
"Yes. I am the actor/writer/artist known as Shia, who recently retired from pubic life because of negative comments about me in the media."
"I'm Alan Moore, and I'm here ta kill you, you fookin' thief!"

The Battle
The fight is for two players. each controlling a character. It continues until one of the characters is defeated.

The Characters
There are several traits and battle maneuvers not in the core ROLF! game. Sorry. Most of the ones not there can be found in ROLF!: Old and Angry. (The one all-new Trait, Plagiarist, is detailed under "New Traits.")

New Traits
Plagiarist: Once per round, the character can use any Battle Maneuver or Spelling that has been used by any other character in the fight. If the ATT check to use the "borrowed" attack fails, the character loses one Body ATT point.

In a show of appreciation for the great talent that is Shia LaBeouf, here is a feat for use with your d20 System. I'm putting it here, and I'm going to claim it as my own. After all, art should be free and we should all be free to claim that we create whatever art we feel like claiming we create!

Plagiarist [General]
You gain a +4 bonus to Linguistics checks to create (but not detect) forgeries, and when you impersonate a specific person those who know the target of your impersonation get only half the normal bonus to their Perception checks to realize you are a fake. (#microfeats)