All NUELOW Games fiction anthologies, comics/rpg hybrid books, core rulebooks, art packs, and selected other products are on sale this Labor Day Weekend for just $0.99! The special prices are good through September 1.

Treat yourself to some fun games and great games and reading material!

Click here to see the full listings!
Posted by Steve Miller at 4:42 AM No comments: Links to this post

The Complete Golden Age Oddballs series brings long-forgotten comic book characters to 21st century readers by collecting every one of their appearances original appearances in books with all-new roleplaying game material and fiction that unites them in a single universe.

The latest entry in the series, Complete Golden Age Oddballs: Angela & Miss Espionage, brings together high school comedy, international intrigue, and Nazi clone program weirdness together in a stew that only NUELOW Games could cook up. Featuring rarely seen artwork by pioneering comic book artist Ruth Atkinson--all collected in one place for the first time--this is at once our most noteworthy and quirky entry in the series so far).

It addition to the rare and classic comics, the Complete Golden Age Oddballs: Angela & Miss Espionage contains support for d20 OGL Modern (by way of 13 feats suitable for sultry spies and sneaky high-schoolers) and ROLF!: The Rollplaying Game (by way of traits, combat maneuvers, four pre-generated characters, and a battle scenario). The book also features brief biographies of the comics creators, as well as original fiction the reveals the dark secret that binds the International Woman of Mystery known as Miss Espionage to the high school hellion known as Angela. (It also ties these characters to Red Robin, the Editor, and other figures and organizations in the NUELOW Games universe.)

Posted by Steve Miller at 12:48 PM No comments: Links to this post

NUELOW will soon be releasing the first in a series of books featuring Princess Pantha, a "jungle girl" action/adventure series by Ralph Mayo and Art Saaf, the main artists behind Judy of the Jungle.

Princess Pantha was an animal trainer and star circus attraction who was challenged by her agent to go on an African safari to capture the legendary giant ape M'Gana. When she vanished in the deep jungle, travel writer and adventurer Dane Hunter was hired to rescue her, or, at worst, learn her fate.

When Dane caught up with Pantha, she had been surviving on her own in the jungle for months, after a cult that worshiped M'Gana had murdered everyone else in her party. She had shed her western clothes in favor of a fur bikini. Over Dane's objections continued to hunt and capture M'Gana, so he joined her since it was the only way he would be able to "rescue" her.

Pantha eventually returned to circus performing, but she continued to don her fur bikini and go on adventures in jungles around the world. Dane joined her on most of them.

Look for Princess Pantha: The Hunt for M'Gana -- coming soon from NUELOW Games!

Posted by Steve Miller at 6:24 PM No comments: Links to this post

... and the six tales within the pages of NUELOW Games' latest comics/rpg hybrid book reveal what happens when they are awakened! Horrors of Egypt present spine-tingling tales of terror from the Golden Age of Comics by great talents like Joe Kubert, Al Camy, and "Barclay Flagg." These classic tales can be enjoyed on their own, or they can serve as inspiration for GMs and players who want to use the new OGL Modern rules by Steve Miller (contributor to the Ravenloft gothic horror fantasy setting) to bring the mysteries of ancient Egypt to life at the gaming table.

Click here for more information, to see previews, and to get your own copy of Horrors of Egypt. And please let us know if you enjoyed the book, either with comments here or at the listings page. 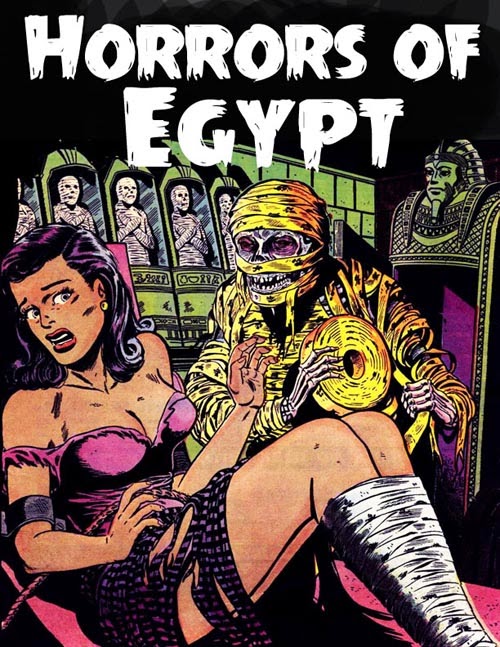 Posted by Steve Miller at 2:25 PM No comments: Links to this post

As I post this, there are roughly nine hours left before the d6xd6 CORE Roleplaying Game Kickstarter ends. The book will contain at least 20 settings, and all backers who pledge more than $21 will receive complimentary copies of Judy of the Jungle: Death Goes Native and Newshounds #1 from NUELOW Games (in addition to an already generous assortment of goodies). These are the first published products to feature support for d6xd6 CORE.

There will also be a countdown party during the final couple of hours at this link. I hope to pop in for a few minutes, but it's not a sure thing for me, as I have a prior engagement. However, I am putting up one more character adapted to the d6xd6 CORE RPG system -- the Bronze Terror, the first Native American superhero to grace the pages of comic books. (The Masked Avengers setting that I was slated to write is not going to be come to pass, as the pledges did not support it. That is the usual outcome for any Kickstarter that I am part, however... which is among the reasons I've never tried to do one on my own. I'm just not talented enough nor famous enough to produce anything that there's enough interest in.)

You can read four "Bronze Terror" stories in NUELOW Games' Real American #1, which includes ROLF! game stats and a battle scenario. I've also concocted an original back-story for Bronze Terror, which will probably show up here on the blog some day.

For more information on the d6xd6 CORE RPG, check out this site where designer Lester Smith has made a draft of the rules public.
Posted by Steve Miller at 12:03 PM No comments: Links to this post