E is for Eve Adams

Eve Adams' parents were killed when she was 14, and she went to live with her aunt Aunt, Adeline Adams, in Peoria, IL. Adeline was a rich heiress who spent her time traveling the globe, so Eve was raised primarily by the servants at her aunt's lavish home.
When Eve graduated from high school (a year early), Adeline told the girl to delay entry into college and instead join her on her trips to the far corners of the globe. Adeline would occasionally arrange for Eve to take a class or two in the world's great universities, but they rarely spent more than three months in one place. Adeline referred to Eve as an "exchange student" wherever they went. 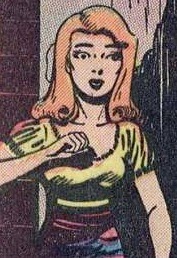 Despite her frumpish appearance and seemingly conservative attitudes, Eve noticed that her aunt frequently showed surprising liberal--and even libertine--attitudes on more than one occasion.  Aunt Adeline also seemed to be equally at ease in high society and in hives of scum and villainy... and she seemed to know people at all levels of society.
On her 19th birthday, Eve learned the truth about Aunt Adeline and the globe-trotting she engaged in. Eve was on a date in Melbourne, Australia, when the charming young man she was with attempted to kill her. She barely escaped with her life, and she found her aunt just in time for an entire team of assassin to descend upon them. Adeline dispatched the assassins with shocking ease--and then revealed to Eve that she was an agent of an all-woman, U.N.-sponsored intelligence organization that she was hoping to induct Eve into--and that the world travel was part of that process. She revealed to Eve that she had been doing missions at each of their stops during the past few years, and that now that her cover had been blown, they would be returning to New York City and the group's headquarters so Eve could begin her real training.
Within the year, Eve left her aunt's tutelage and assumed her role as a hunter of international war criminals and evil masterminds while masquerading as an early member of the jet-set. During the 15 years she was an active agent, she crossed paths with the likes of Kismet the Man of Fate, Princess Pantha, Lady Satan, and even the immortal guardian of justice Spacehawk. She later became one of the chief instructors of female agents who kept the world safe during the 1970s and 1980s.

Special Note: Eve Adams and Aunt Adeline were featured in early issues of School-Day Romances and Popular Teen-Agers from Star Publications. The revelation of Adeline's connection to a secret U.N. department, Eve's tragic past and exciting life as a spy herself weren't revealed in the series. They are the invention of Steve Miller.
Posted by Steve Miller at 9:44 PM