J is for Jay Brooks 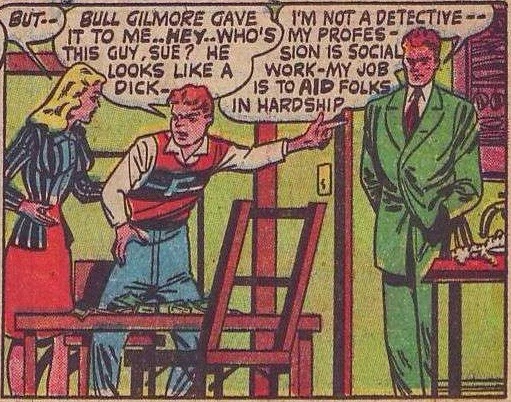 Jason "Jay" Brooks was a hardboiled social worker who took on worked with teens who were slipping into lives of crime. He charged for his services, but would often waive his fees for cases he found particularly interesting, or for families who were in dire financial straits. He was also something
Before serving in WW2, Brooks had been a vice detective in Empire City. Upon returning home in 1945, he set his mind to rescuing those who might be tempted into lives of crime instead of incarcerating them once they were already corrupted. He ran his freelance "social work" business until 1954, occasionally teaming up with the likes of Jill Trent and the King of Darkness. He was eventually forced out of business when a boy he had been trying to help was killed by gangsters and his parents filed suit against him.
Brooks did not give up his crusade to make the world a better place, however. He relocated to Los Angeles where he adopted the costumed identity of White Flash. He had several team-ups with Black Cat until an injury forced him to retired from the superhero business in 1958. He then went back to school, got a social works degree, and picked up where he had left off. He worked for L.A. Youth Services until his retirement in 1972--with the reputation of being the toughest social worker to ever walk the mean streets of South Central.