We're sure you've all heard about the flying city that appeared in the sky over China. It looked like this: 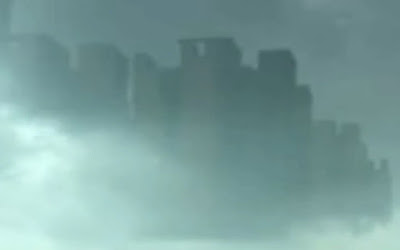 There have been all sorts off theories posited regarding what that is. Some say it was a Fata Morgana. Others say a dimensional portal opened, and we got a glimpse into an alternate reality. Yet others say that China was experimenting with highly advanced laser holographic projection technology, or that they've created a flying city using anti-grav technology.

All of those theories are wrong.

The truth is that what everyone saw was the City of Zoom, the dimension-traveling home of the Sorceress. And we apologize for the panic and confusion it caused.

NUELOW head-honcho Steve Miller was discussing with the Sorceress what to include in the third volume of our Sorceress of Zoom series. During that conversation, Miller was munching on one of those black Halloween burgers from Burger King. He mentioned that eating one reportedly turns your poop green, and the Sorceress decided she wanted to acquire some to feed to her minions. Miller, unfortunately, referred to Burger King as "B-King" and the Sorceress thought he said "Peking."

We apologize to the world for the panic this has caused. We apologize specifically to the hundreds of Chinese citizens that were abducted by the Sorceress in her search for black hamburgers, especially those she temporarily turned into komodo dragons or bowls of egg drop soup.

Miller has promised that he will never interact directly with the Sorceress again, but will instead leave all communications with her to Chuck  Norris or L.L. Hundal. Please don't sue us.

For more insights into the truth behind the flying city that appeared in the sky above China, read The Sorceress of Zoom and The Sorceress of Zoom: Down to Earth from NUELOW Games. During 2016, we plan on releasing a third volume in the series. The Sorceress has asked that we include rules describing her in the OLG version of the Traveller game system. It's her favorite, because characters can die during creation. You can read sample pages from the existing books at the Shades of Gray blog by clicking here.