In 1947, daredevil Jane Dodge vanished while flying her plane over Africa... and that's when her life really began. 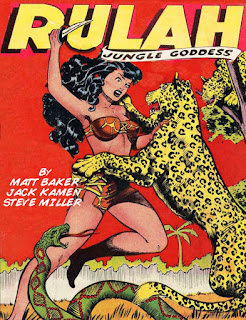 NUELOW Games has just released the first volume in a new series of comics/rpg jungle adventure books--Rulah, Jungle Goddess. It's a series that occupies a middle ground between the straight-up adventure stories found in our Judy of the Jungle titles, and the fantasy/horror-tinged tales in The Three Lives of Fantomah books, as Rulah battles foes who are both natural and supernatural.

Rulah, Jungle Goddess contains the story of how Jane Dodge became Rulah, as well as three other adventures that sees her battle Nazis, evil priests, and monstrous harpies. In addition, it features OGL d20 Modern rules that are geared toward letting players make characters who are living gods and goddesses like Rulah... and even ones who have supernatural powers like Fantomah. (The game section has a new starting occupation, two new talent trees, and several feats fit for a living goddess.)

Click here to see previews of Rulah, Jungle Goddess, or to get your own copy at RPGNow. You can also get the book from DriveThruComics by clicking here..

The OGL d20 Modern rules in Rulah, Jungle Goddess make great additions to the material presented in Modern Basics: Jungle Action, and they're fully compatible with all the feats- and talent tree-based d20 superhero mechanics that we've published.