On November 30, it's Black Monday at NUELOW Games...

... because we can't keep the whole Black Friday/Cyber Monday thing straight, we decided to merge the Friday and Monday sales into one. We also wanted an excuse to post this picture someone took at a Japanese department store.

The sale runs at RPGNow, DriveThruComics, DriveThruFiction, and DriveThruRPG from 7am November 30 to 7am December 1 (Pacific Time).
Posted by Steve Miller at 1:55 PM No comments:

The latest comics/rpg hybrid product has been released, and it stars one of the greatest superheroines to ever be forgotten by comics readers--Wildfire.

Wildfire is secretly Carol Vance. As a young child, she laughed in the face of the mighty Lord of Fire, even as he was burning everything around her. As a reward for her courage, he made her a Mistress of Flame--a status that gave her protection from fire and a range of powers related to manipulating and harnessing fire. In her late teens, she began using her powers to fight crime and injustice.

Wildfire from NUELOW Games contains five tales of Carol's exploits, written and drawn the team who created her--Robert Turner & Jim Mooney. Turner was a pulp fiction writer, and Mooney spent fifty years drawing comics starring characters like Wildfire... including Supergirl. In addition to the comics, the Wildfire book contains an OGL d20 System character template and a pair of feats designed to let you create characters like Wildfire with the version of the d20 System you currently enjoy playing. You can click here to see previews of Wildfire, or to download your own copy from RPGNow. (It is also available at DriveThruComics and DriveThruRPG.)

As always, if you have feedback or suggestions regarding our releases, don't hesitate to get in touch. We don't know what we're doing right or wrong unless you tell us!

Posted by Steve Miller at 12:55 AM No comments:

Music of the Sorceress

There aren't many of the characters featured in NUELOW Games releases that have music that is officially written for them. There may even be only one who has so moved a composer... so it's only fitting that character should the deadliest femme fatale to ever travel the multivese--the Sorceress of Zoom!

In May of 2015, the Esperanza Ensemble performed the world premiere of Justin E.A. Busch's "The Sorceress of Zoom, Op. 98." Here it is:


The Sorceress of Zoom has starred in two books from NUELOW Games. A third one, which will reveal her never-before-told origin story, will be released in 2016.

You can read sample pages from the existing books at the Shades of Gray blog by clicking here. You can see more previews, or get your own copies at the links below.

Posted by Steve Miller at 11:34 AM No comments:

The superpower for unlucky sad sacks

The text in this post is released under the Open Game License and may be reproduced in accordance with it. Copyright 2015 Steve Miller.


Between the Legion of Substitute Heroes and the Great Lake Avengers, even mainstream comic book universes have their superpowered failures and comic relief. This little expansion to NUELOW Games' superpower system is for heroes who make the most out of their flubs. In fact, failing IS their superpower.


THE POWER OF EMBARRASSMENT [Minor Power Feat]
Your failures make you stronger!
Benefit: Whenever you fail a skill check tied to the Charisma attribute, you gain a +2 bonus to a future skill check or attack action that is not Charisma-based. The bonus must be used before the end of the encounter during which the initially failed skill check took place.

HUMILIATED TALENT TREE
You must have at least one Minor Power Feat to qualify for any of the talents from this tree.
Clumsy: Whenever you fail a Dexterity-based die roll (including ranged attacks) or a Reflex save, you gain a temporary +4 bonus to Charisma. This benefit lasts for the duration of the encounter during which the original failed roll took place.
Slow on the Uptake: Whenever you fail a Wisdom-based die roll or a Willpower saving throw, you gain a temporary +4 bonus to your Intelligence. This benefit lasts for the duration or the encounter during which the failed roll took place.
That Which Doesn't Kill You, Makes You Stronger: Whenever you fail a Constitution-based skill check, or a Fortitude save, you gain a temporary +4 bonus to your Strength. This benefit lasts for the duration of the encounter
Focus On the Negative: Choose one other talent from this tree that you've already selected. The temporary bonus lasts for a number of hours equal to your Will save bonus. You may choose this talent up to three times, each time applying it to a different talent from this tree.
Destined to Fail: Once per session, when you fail a skill check to a horrendous degree (more than 8 below the target number), you may invoke this trait. At the speed of thought, the realization as to how actions you took earlier set you up for this failure flash into your mind. If you describe the event that preceded this disaster, and if the GM things it's plausible or amusing, you may immediately re-try the action. (You make the re-try on the same initiative that you already acted on.)
Prerequisite: The Power of Embarrassment minor power feat

--
If you found this amusing or useful, please consider getting some of our many OGL d20 System releases that are available here.
Posted by Steve Miller at 10:55 AM No comments:

For those who want Caliphate Compliant d20 characters

I have been informed that it's important that we understand the mindset of those who wish to bring us all under the rule of the Caliphate of the Daesh (or ISIL, if you're US President Barack Obama and you're already recognizing their claim on all the land between Turkey and Egypt). Since roleplaying games can be good educational tools, I have devised this talent tree so you can all create d20 Modern characters that in the mold of the mightiest of Daesh fighters! (These talents should be added to those available for Tough Heroes and Strong Heroes.)

The rest of this post is released under the Open Gaming License and may be reproduced in accordance with its terms. Copyright 2015 by Steve Miller.

Posted by Steve Miller at 10:43 AM No comments:

Last year, in the pages of News Hounds #1, we included a scenario for Lester Smith's CORE RPG where the Black Cat and reporters Ace Williams and Foggy Gibbons meet Zaza the Mystic and team up to defeat a Swami who has marked them all for death. 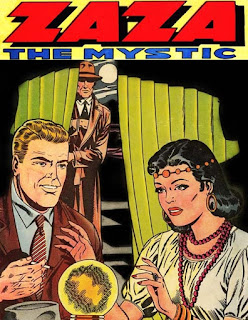 Now, Zaza returns in her own self-titled book, Zaza the Mystic, starring with her boyfriend, police detective Lt. Bob Wilson in four thrilling tales of mystery from NUELOW Games. In addition to the classic comics written by Jerry Seigel and drawn by Charles Nicholas, Rocco Mastroserio, and Jon D'Agostino, the contains OGL d20 System rules that will let players create "fake psychics" like Zaza, as well as criminal profilers, who use their powers of observation and insight into human psychology to get one step ahead of criminals and other enemies. This material, fully compatible with d20 Modern and NUELOW Games' other OGL d20 releases, was designed by our own Steve Miller.

In addition to the original game material, Steve also filling in tiny bit of information about Zaza's background, including her full name and a little bit about her childhood. Her original publisher, Charlton Comics, never explained much about where she came from or where she learned her cold-reading skills, other than to describe her as the "Queen of Gypsy Mystics." (A total of six Zaza stories were published in 1956, in issues 10 and 11 of Zaza the Mystic. (The numbering continued from Charlie Chan Comics.)

Here's how Steve summed up how Zaza came to be a crimebuster:

How do you rebel if you're a teenager who's been raised in a circus to be the Gypsy Queen of Fortunetellers and to bilk the rubes out of money? If you're Zaza Kamlo, you run away to the big city, date a police officer, and use your talents to catch criminals rather than being one.

Zaza the Mystic is on sale now at RPGNow, DriveThruRPG, and DriveThruComics. Click on the name of your favorite Onebookshelf site to get your copy today!
Posted by Steve Miller at 10:09 PM No comments:

The official position of NUELOW Games

Just to be clear: 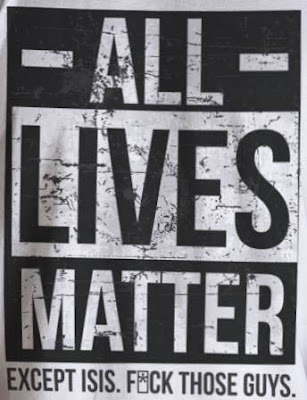 Posted by Steve Miller at 6:32 PM No comments:

A Talent Tree and Feat for Urban d20 Modern, Dawg!

For your Urban d20 Modern games...

(This material is released under the Open Game License and may be reproduced in accordance with it. Copyright 2015 by Steve Miller)

Gangbanger Talent Tree (By Steve Miller)
Talents from this tree may be selected by Tough Heroes or Strong Heroes when they gain talents.
Weapon Skilz!: Your non-proficiency penalty with the use of small arms is reduced to -2. You can also hold an automatic or semi-automatic weapon in the most idiotic fashion you want while firing, without dropping it or being hit by ejecting cartridges.
Fashun Senz!: You can wear oversized pants with no belt and only suffer -10 feet to your movement rate when running. You penalty to Climb, Jump, and Run skill checks is reduced to -4.
Colur Senz!: Pick a color. When you wear that color, you gain +2 Defense Rating. Pick another color. When you see someone wearing it, make a Will save. If you fail the save, you must attack them. You gain +2 to all attack and damage rolls against the target. (This talent may be chosen up to five times. You must select different other color each time. The +2 bonus to the Defense Rating only applies once.)
Help, Help! I'z Bein Oppressed: You gain +4 to all Bluff and Diplomacy checks when dealing with reporters if you're anything but white and end up on the news. The bonus increases to +6 if you were looting a shop, setting a car on fire, or protesting policing at the time. 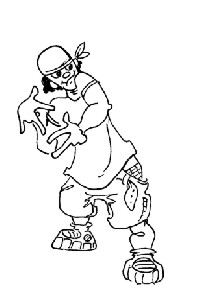 Homie-flage Feat (By Dave Mendez)
You may go onto enemy turf wearing their colors without getting caught.
Benefit: Gain +5 to Bluff skill checks while disguised as a member of another gang in their territory.
Special: If one of your own homies sees you wearing your enemies color, he starts tripping and calls you out as a buster. You suffer -5 to all skill checks when dealing with your own crew til you improve your rep with your homies.

If you enjoyed this material, please consider getting one of our actual d20 System products! Click here to check them out!
Posted by Steve Miller at 1:56 PM No comments: