Use this table to randomly generate how the player characters will be impacted by the US Federal Government Shutdown! (Roll 1d10.)

1. Lax security at Area 51 allows 1d4+2 alien captives to escape, and they come to the PCs for help.
2. North Korean operatives bribe cash-hungry non-essential DoD employees for access to a secret base and take it over.
3. The true nature of the "11 Secret Herbs and Spices" will be revealed when a cash-hungry CIA contractor goes to sell it--unless the PCs stop him!
4. Nicholas Cage resumes his quest to discover secrets hidden within US historical landmarks... and he invites the PCs along to take advantage of the lax security.
5. Nancy Pelosi's true nature as a Reptilian space alien will be revealed... unless the PCs can get her to a special hospital where she can receive treatment for an illnes unique to her species. The medication shipments were delayed due to the postal service shutting down.
6. The Martians resume their stealth invasion.
7. The Secret Werewolf Army move to take over Yosimite National Park.
8. Donald Trump's hair (an alien symbiote) gets tired of the chaos, and it has him declare Martial Law. The campaign transitions into a "Cyberpunk 2020"-type setting.

9. The sonic waves that were keeping Godzilla, Mothra, and Monster dormant in various locations around the world cease when they are shut down due to lack of operators. The monsters begin rampaging!
10. The ectoplasmic containment unit hidden in a disused subway tunnel under Manhattan fails due to lack of maintainace. The thousands of ghosts and evil spirits that have been trapped their over the decades of the secret anti-ghost program are unleashed upon the unsuspecting city. 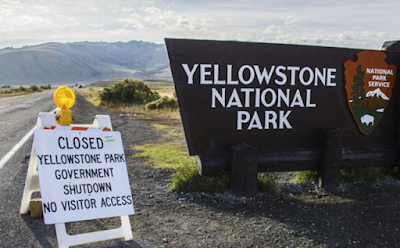 --
If you found this post useful or amusing, please consider picking up one or more of our actual releases. It will encourage us to make more! Click here to visit our "store" at RPGNow.
Posted by Steve Miller at 12:12 AM