What should we call the next ROLF! release?

I am currently putting the final touches on the first ROLF! Cyberpunk supplement....

It's set in the year 2042, a Dark Future in which only the rich and powerful get to wear pants. However, a brave group of cyberpunky freedom fighters are hoping to change all that--the Trouser Snakes are launching a win-or-die assault on the Wearhouse to liberate a billion or more pairs of long pants and return them to the people!

But we're struggling a bit for a title. If you see this post in the next couple of hours (and as I type this, it's roughly 16:00 Pacific Time (4pm, if you will, on the west coast of the United States), you can tell me which title you like best:

1. Rise of the Trouser Snakes (the title L.L. Hundal and I are currently going with).

2. Attack of the Trouser Snakes

3. Day of the Trouser Snakes

By way of a preview, here are some of the character illos that will be in the product:


Posted by Steve Miller at 4:03 PM No comments: Links to this post 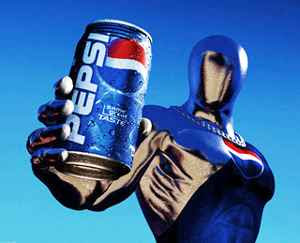 Over at Cracked.com, they posted an article spotlighting superheroes created to promote products and companies. While most of them are pretty lame, how can one not love Pepsiman and Lemon-Pepsiwoman? In fact, I think they'd be perfect for ROLF! games. Pepsi should pay us to make a series of Pepsiman ROLF! products.

Think I'm wrong? Check out this compilation of all the Pepsiman commercials. That's a whole lot of ROLF! inspiration that is!

Since the likelihood of Pepsi paying us to do Pepsiman products is pretty close to Zero, here are ROLF! stats for Pepsiman and Lemon-Pepsiwoman for your enjoyment anyway. (Which means they may sue us instead....)

New Combat Maneuver
Dispense Pepsi/Dispense Lemon Diet Pepsi: When using this maneuver successfully, the character makes cans or bottles of Pepsi appear in the hands of all characters involved in a fight. All other characters must stop whatever they're doing to drink the tasty Pepsi product in their hands, losing any remaining actions the round the maneuver was used, as well as any during the full ABBA cycle the following round. Characters drinking Pepsi feel refreshed and regain 5 lost Brawn points (up to their starting maximum). In order to have this Combat Maneuver, a character must have the Robot Trait, and he must have the word "Pepsi" in his name. ATT Body.

(For more ROLF! superhero goodness, check out "Bullets to the Head" and "Bat Meets Cat.")
Posted by Steve Miller at 5:47 PM No comments: Links to this post

We've just released our second annual ROLF! Thanksgiving special... and we're thankful for that, because this one was fraught with all sorts of technical difficulties! You can check it out by clicking here.

ROLF!: Turkey Shoot was partly inspired by the Sally the Sleuth comics, and it features game stats for Sally, her sidekick Peanuts, her boss Chief Brady, and all the maneuvers and traits you've come to expect.

It also features game stats for the notorious filmmaker Uwe Boll, as Sally and her fellow crime-fighters are called upon to save him from the marauding film fan Turkey Avenger. And--as an extra special Thanksgiving treat--the product also contains a small selection of the original Sally the Sleuth comics from pulp fiction magazine Spicy Detective Stories. 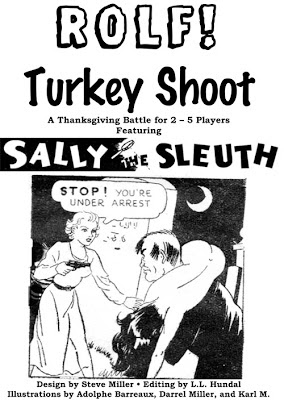 ROLF!: Turkey Shoot is available at RPGNow. Click here for previews, or to buy a copy now.

Our Thaksgiving release for 2011 is still available if you missed it... click here to experience Edward D. Wood Jr. saving the Pilgrims in ROLF!: Day of the Turkey.

And now, as we go off to celebrate Thanksgiving with friends and loved ones, let us just express our thanks for all of you out there who share our love of gaming, pulp fiction, and trashy pop culture. We love you all, especially those of you who also happen to enjoy the stuff we put out through NUELOW Games. You we are especially thankful for.
Posted by Steve Miller at 12:50 PM 2 comments: Links to this post

Have you seen our new releases for OGL d20 Modern?

It dawned on me that I have failed to call attention to a couple recent releases from NUELOW Games. This is double-shocking since they're projects that I designed!

NUELOW Games, as part of an overall effort to produce more material for d20-based OGL games, have recently released three products geared for OGL Modern -- although they are compatible with the most popular OGL RPGs as well... like that one with "Path" in its name.

These new releases are appearing under the umbrella name of Modern Basics and each features feats and skills focused around a theme or type of character. So far, the series contains:

Good Cop, Bad Cop: Feats for Those Who Carry a Badge

Feats of Seduction and Subterfuge


And if you like to have a little gaming with your poetry, you might find Shadows of Dreams a worthwhile addition to your PDF collection. At the back of this poetry collection are a handful of magic items inspired by them.

When the Grim Reaper launches a scheme to destroy all of Creation, it's up to the Guardian Angel of Supermodels and the Patron of Excess to stop him! 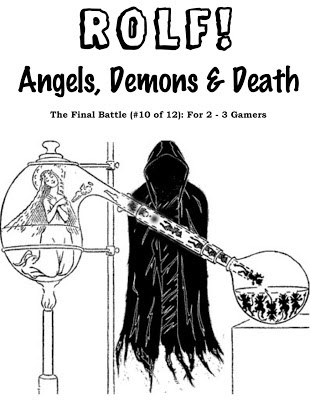 That's what passes for the plot in the latest ROLF! supplement, the tenth Final Battle as the predicted End of the World has still not occurred. We have high hopes for December, though.

ROLF!: Angels, Demons & Death features several all new Spellings, Combat Maneuvers, and Traits (some of which let you create your own high-flying winged characters), five pre-generated characters, Battle Scenarios, and manga-esque portraits of the demon and angel. Click here to see previews or to get your own copy for just $0.50 from RPGNow.com.

Another noteworthy fact is that this is the 50th release for ROLF!: The Rollplaying Game of Big Dumb Fighters. Thank you to all who have downloaded our products so far!

Posted by Steve Miller at 9:44 AM No comments: Links to this post

Here's a wondrous item for use in d20 Modern games where the supernatural is present. (Or any roleplaying where a sense of humor is appreciated.)

This item is designed by Steve Miller. It is presented here under the Open Gaming License v.1.0a.

Myron's Party Jug (Unique Magic Item)
This item appears like a large brown jug that is stoppered with a cork. It radiates a faint aura of Enchantment and Summoning magics if such is detected for.

When Myron's Party Jug is uncorked, a mist that smells like moonshine pours out and coalesces into a three-piece hillbilly band (washboard, fiddle, and harmonica) within one round.
The band plays vigorously for 2d4x5 minutes before vanishing. If attacked, the hillbilly musicians defend themselves, fighting like low-level warriors (no higher than 3rd level in level-based game systems), wielding their instruments like weapons that deal 1d6 points of damage per strike. When slain, they vanish.
The Jug can typically be used once per day in most areas, but it can be used twice per day in the Orzark or Humboldt Mountains.

The excellent (and free) GM-less mini-RPGs by Neal Stidham are once again available for download from NUELOW Games via RPGNow. Round up two of your friends and have yourselves some off-beat roleplaying fun!


If you have a game you would like to bring to the public, please get in touch! We'd be happy to distribute it for you--even edit, do light development, or layout for you.  There are strength in numbers--regular releases under the same banner help increase everyone's sales!
Posted by Steve Miller at 6:44 PM No comments: Links to this post