Artifacts of the Muses

NUELOW Games's primary creator Steve Miller posted his latest bit of fun that casts real-life silent movie star Bessie Love as a superhero who battled supernatural evil from 1925 to 1950 over at his 'Shades of Gray' blog. We'll eventually bring that article over here, but, in the meantime, here's a little something that ties in with that post....

ARTIFACTS OF THE MUSES
By Steve Miller & L.L. Hundal
All text in this post is released under the Open Game License,
and may be reproduced in accordance with its terms


The nine goddesses of creativity and scholarship, the Muses, have a number of powerful magic items that they grant use of to those who have earned their favor, who are engaged in work they consider important, or to whom they have assigned a particular quest. The items all grant certain basic abilities to those who have the Muses' blessing to use their treasures, as well ones that are unique to each item. Those who gain possession of the items and use them without the Muses's blessing, are subjected to a curse. 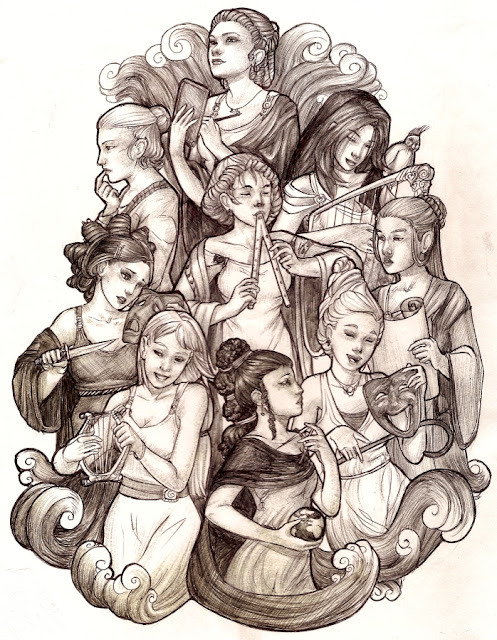 General Powers and Shared Traits  of the Artifacts of the Muses
The mortal granted the use of one of the Artifacts of the Muses enjoys the following basic benefits when the item is worn, wielded, or otherwise carried on his or her person.
* +1 bonus to all Craft, Knowledge, and Perform skill checks.
* +1 bonus to saving throws against Mind-Affecting magic and spell-like effects.
* Each of the Muses' artifacts radiates faint magic of an indeterminable type. Analyze and identify spells fail to reveal anything about the items. Only a wish spell, or an explanation of the item's power from one of the Muses, or the Greek gods Apollo or Erinyes can reveal the items uses. (Some uses can be gleaned through trail and error. Generally speaking, however, a character who rightfully has possession of one of the artifacts will have had their purpose explained to them.
* Once the purpose for which the Muse lent the artifact to a mortal has been fulfilled, the artifact vanishes. (The Muse may appear to reclaim it in person, but this is rare.)

Descriptions and Powers of Individual Artifacts
The Muse's Lyre (given by Clio, Erato, and Polymnia, a golden lyre with a silver crossbow carved with symbols representing the Nine Muses): Gain +4 bonus to all Charisma and Wisdom-based skill and attribute checks.
Euterpe's Flute (given by Euterpe, a double flute made of wood and bound together with spun gold): Gain the ability to understand and fluently speak all languages, but not read them.
Melpomene's Knife (given by Melpomene, a large combat knife with small symbols representing the Nine Muses etched into the blade, four on side, five on the other): This combat knife deals 1d4+5 points of damage (+5 enchantment bonus), and the person carrying or wielding cannot be flanked.
Melpomene's Mask (given by Melpomene, an unadorned traditional theatrical Tragedy Mask made of alabaster): While worn, the mask grants a +5 bonus to Move Silently skill checks.
Ourania's Globe: (given by Ourania, a softball-sized globe of the planet Earth): When held under the open night sky, the user can transport him- or herself, plus a number of other characters within a 10-foot radius equal to the total of the user's Intelligence and Charisma attribute bonuses, to any location he has seen on a map. The user and companions appear outside a building, or near a location, where the performance or creation of art or scholarly lectures usually takes place, or used to take place, that is closest to the specified location. The artifact can be used once every three nights. Unwilling or unaware targets of this effect receive a Will save with a +2 bonus to avoid being transported.
Terpsechore's Crown (given by Terpsechore, a wreath of forever-fresh bay laurel branches and leaves). This wreath gives the wearer the use of a spell-like abilities that mimics charm person three times per day.
Terpsechore's Harp (given by Terpsechore, a portable silver harp with her symbol engraved with gold on it): Grants the user a +5 bonus to Perform (Stringed Instruments) when played. If the user utters Terpsechore's name while playing the harp with a successful DC12 Perform (Stringed Instruments) skill check, a number of targets equal to his or her Charisma bonus within line of sight who can hear the music are subjected to the effects of an Irresistible Dance spell. Targets must dance for as long as the user plans the the Harp, plus a number of rounds equal to his or her Charisma bonus. If an enchanted character is attacked or otherwise injured, the effect ends and he or she may act as normal.
Thalia's Club (given by Thalia, a two-foot long club that ends in a crook and which is painted gaily in bright blue, green, and red colors): The club deals 1d4+5 points of damage (+5 enchantment bonus), and the person carrying or wielding it has a reduction of 2 against blunt damage.
Thalia's Mask (given by Thalia, an unadorned traditional theatrical Comedy Mask made of alabaster): While worn, the mask grants a +5 bonus to Tumble skill checks, as well as a +2 enchantment bonus to Armor Class/Defense Rating.


Possessing and Using the Artifacts Without Permission
If a character comes illicetly or unwittingly into possession of a Muse's artifact--by looting or otherwise stealing it directly from the person it was lent to, or taking it from a treasure hoard found in a long-abandoned locatation--the Muse who owns it will appear to him or her in a dream. She will introduce herself and explain to the character that if he or chooses to keep the artifact, he or she will be required to adopt the task that the person it was legitmately supposed to be in the possession of, or return the artifact within three days. The Muse will explain the original quest. (The Muse will leave it up to the character to figure out how to pursue the quest or return the item--which can be learned in a variety of ways--but the item must be brought to a place where artists and scholars either create, work, or perform.)
If the character has not started to work toward the Muse's assignment within three days, he or she is visited in a dream by Erinyes, a goddess of revenge who is dedicated to punishing liars, cheats, and those who escape the hand of justice. Erinyes warns the character to return that which was stolen, and the the dream turns into a nightmare full of torture and monsters. The character must make a Fortitude save (DC12) or sufffer a -1 penalty to all skill checks, attribute checks, and saving throws the following day.
Erinyes haunts the character's dreams every night until the Muse's item is returned, or until Erinyes is someone placated. Each night Erinyes sends the character nightmares, he or she must roll a Fortitude save, which increases in difficulty by 2 each night (DC12, DC14, DC16, and so on), and the penalty to checks and saving throws on the following day increases by +1 for each consequetively failed saving throw. Conversely, the penalty is reduced by 1 for each night a successful save is made.
Magical wards and spells intended to protect the character from being haunted by the goddess in hir or her dreams must be recast each night. Remove curse and similar efforts will have no effect, as the character isn't cursed; he or she has just attracted the attention of a wrathful goddess.
As soon as the item is returned to the Muse, or the character has devoted him- or herself to the quest or task its possesser was supposed to undertake, Erinyes stops her nightly visits, appearing only once more along side the wronged Muse. The Goddess of Vengeance says she hopes the character has learned a lesson, while the Muse thanks him or her for helping. Any accumulated penalties are removed, and the character enjoys the benefits outlined in the "Summoning a Random Muse" for the Muse the artifact belongs to, as if he or she had summoned that Muse. (Click here for details.)