The second issue of NUELOW Games' horror anthology, The Werewolf Hunter, is now available for download. Like the first issue, it's got great horror comics rarities from the Golden Age (two adventures starring Prof. Armand Broussard, the Werewolf Hunter himself; one starring the mysterious Lade Satan; and one re-introducing "girl photographer" Gail Porter to the world), fiction (an all-new story from Angela Beegle, author of the Werewolves of Washington series; and a Robert E. Howard story with revisions by yours truly), and more systemless RPG content to bring variety to standard monsters in campaigns. 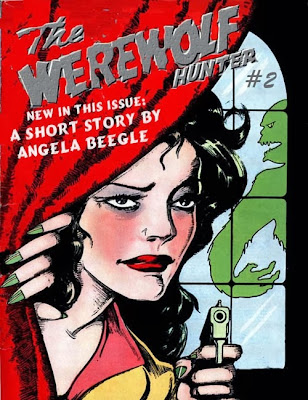 Click here to see previews and to get your own copy of The Werewolf Hunter #2.
Posted by Steve Miller at 11:38 AM No comments:

Now through the end of the Twelve Days of Christmas (that would be Jan. 5), you can own the entirety of NUELOW Christmas Past at a huge savings with just a few mouse-clicks by getting A Christmas Box [Bundle]!

This big bundle of ROLF! gaming goodness contains the core game, five Christmas battle scenario packs--with Santa, his daughter Sugar Plum, and their friends defending Christmas from all manner of nefarious forces, with the Martians being first and foremost among them. This collection even includes our Christmas-themed short story anthology Horror for the Holidays,  and the first NUELOW appearance of Jill Trent, Science Sleuth.

Games... fiction... comics... everything you need to have a great Christmas Season with family and friends (except dice... those you're goning to need to provide separately).

Click here to get your very own copy of A Christmas Box [Bundle] for just $2.50. (That's 58 percent off what it would cost to buy the seven included products individually.).

The 2013 Christmas Special, starring Santa and that swinger Judy of the Jungle is also still available... you can get that by clicking here.

Posted by Steve Miller at 11:45 AM No comments:

Just in time Christmas, we bring you A ROLF! Christmas Special: The Revenge of Santos (and other heartwarming battle scenarios). It's by the same crew that brought you last year's ROLF!: Christmas Chaos, and the centerpiece of this product is a standalone sequel not only to or very first Christmas Special--Santa vs. Santos vs. Jesus--but also to ROLF!: Hawaiian Manhunt.

If that isn't special enough, there's also a battle scenario that pits Frosty the Snowman against Abominable Snowmen, and one that answers the question "what would happen if Santa tried to collect James Randi's million dollar prize for proving his supernatural powers?"

In addition to all that gaming goodness, this booklet also features a nine-page comic starring Judy of the Jungle, because nothing says Christmas like a girl in a skimpy outfit swinging from vines!

As our gift to you, in thanks for visiting our blog, you can get The Revenge of Santos for 33% the normal price by using the links in this post.

May your Chirstmas Season be filled with much gaming! 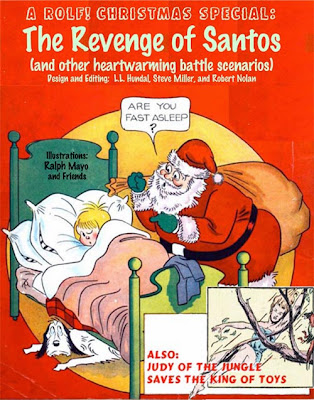 Posted by Steve Miller at 12:32 AM No comments:

Email ThisBlogThis!Share to TwitterShare to FacebookShare to Pinterest
Labels: Christmas, Judy of the Jungle, Rolf, Sally the Sleuth

Nothing can stop "Madden's Boys"
(or the OGL Modern superhero rules)!

Our latest comics/rpg hybrid book is near and dear to the heart of NUELOW Games editor and designer L.L. Hundal She has a great affection for the art of Bill Madden... and this book features five stories penciled and inked by him. 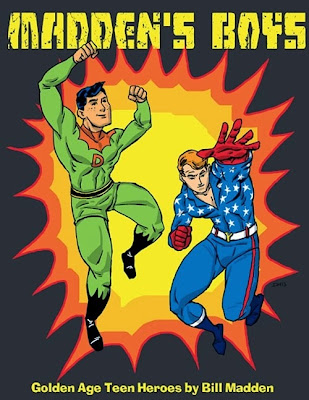 Madden's Boys continues NUELOW Games's effort to shine a little light on cool forgotten characters and comic book creators and this is perhaps our most significant effort in that regard yet. Madden and his small body of work is so disregarded that even respected Golden Age historians respond with a "who?" when approached with questions. Like our previous Madden-centric books Mother Hubbard and The Unholy 3 & OGL Trickery, we present the entirety of a series he drew (in this case "Dynamic Boy") but the book also contains his contributions to the "Yankee Boy" series--the three inaugural stories of one the more successful creations to emerge from Harry 'A' Chesler's studio.

In addition to showcasing Bill Madden's dynamic artwork, Madden's Boys contains the most varied selection of roleplaying game material we've included in our comics/rpg hybrid books so far. Not only does it contain an all-new set of rules for making superheroes in d20 OGL Modern superhero games, but it also features game statistics for Dynamic Boy and Yankee Boy in the ROLF! and Hideout & Hoodlums game systems/ And it's all behind an original cover by Darrel Miller.

On New Comics Day this week, why don't you add a copy of Madden's Boys to your DriveThruComics shopping cart? You won't regret it!
Posted by Steve Miller at 8:16 AM No comments:

A gift to help with your happy holiday gaming!

In celebration of the most wonderful time of the year, NUELOW Games and Andrew Pavlides bring you a gift of FREE overland/outdoor maps for use in your home games.

NUELOW Map Pack #1: The Forest features six geomorphic maps of forest terrain that can be combined into hundres of different outdoor adventure areas for any genre of roleplaying game or miniatures game.

This download includes a booklet with an index to the map segments, and a zip archive with each map as a seperate jpg file for easy printing. 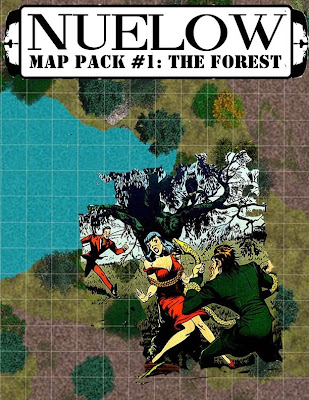 Click here to see previews or to download your own copy of this Christmas gift from NUELOW Games to you!
Posted by Steve Miller at 7:39 AM No comments:

In celebration of Miley Cyrus being named Artist of the Year by MTV, we present stats for her, so you can bring her to your gaming table. If you thought she was all about taking a dump on good taste and good music, you were wrong. MTV says so. It doesn't matter what it looks like she's doing in this picture. 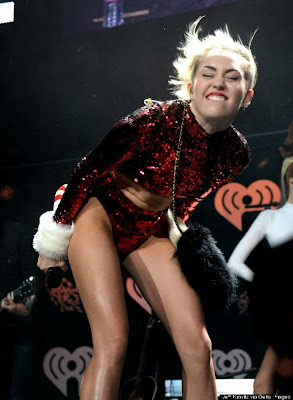 
THE MYLIE CYRUS FEAT (for OGL Modern and More!)
By L.L. Hundal

Prehensile Tongue Your tongue is unnaturally elongated, strong, and good for much more than just tying cherry stems into knots.
Benefit: You can use your tongue to perform any Dex based skill that involves manipulating small objects, such as Open Locks. The skill check DC is increased by +4.
Special: Prehensile Tongue gives a +2 circumstance bonus to Bluff, Diplomacy, Intimidate, and/or Seduction skill checks as appropriate. Anyone who sees your tongue on display must roll a Fort save or be put off food for 2d6 hours.

--
Everything in this post, except the photo and Mylie Cyrus (who is defined as someone's product identity but not ours), is presented under the Open Gaming License. Copyright 2013 Steve Miller
Posted by Steve Miller at 1:42 PM No comments:

Here's a little more of the OGL Modern superpowers add-on system that's slated to appear in our forthcoming Madden's Boys book. The pre-req for these talent trees is at least one of the Minor Power feats described in this post.

More to come --and feedback is always welcomed. (This post is published under the Open Gaming License. Copyright 2013 Steve Miller.)

Unbreakable: Damage suffered from all non-magical sources is reduced by an additional 25 points. This reduction is is applied before saving throws or other damage-reducing mechanics are applied.
Prerequisite: Resistence to Harm, Robust. 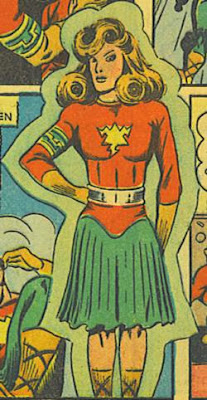 Posted by Steve Miller at 12:39 PM No comments: